The grocery retail market in Romania, covering both fresh and packaged food and non-food products sold in grocery stores, was worth RON 58.1bn (€13.7bn) in 2011. According to projections presented in PMR’s latest report “Retail In Romania 2012”, the market is expected to lower its growth pace below 1% in 2012.

The global economic crisis negatively impacted the market not only in 2009 but also in 2010. Last year, the slightly improved economic situation led grocery sales in Romania to increase by 3.2% to RON 58.1bn (€13.7bn). However, the value of the market was lower than the peak value in 2008. Although in the past the market experienced double-digit growth, we predict that such figures will not return at least until 2015.

In 2011, Romanian retailers were in general divided into two groups. The first, consisting of major international players, used their capital for expansion, especially as land prices fell and also some chains were easy to take over. The second group was comprised of many smaller Romanian companies that underwent major financial difficulties, leading some of them to go bankrupt, declare insolvency, close down some stores, or at least change their expansion plans. Yet, even among local players, there were banners that managed to increase their number of stores such as Unicarm, Agricola Bacau, Annabella, Succes, LeFruMarin and Alba Market. In 2012, the market is expected to lower its growth pace below 1% as the market is still undergoing some difficulties, e.g. Mercadia Holland BV become insolvent, as Interex decided to close down all its stores.

Modern retail in Romania grew with the entry of large format stores in the country. In 2011, the trend was strengthened by hypermarkets and discounters. Both formats opened outlets and covered more towns, and also attracted customers with many promotional campaigns and reduced prices.

The traditional formats of retail accounted for approximately 43.6% of the Romanian grocery market in 2011. The share was reduced by 1.2 p.p. compared to the year before due to further expansion of the modern grocery chains. A few years ago traditional retailers started to lose the competition, especially to hypermarkets and discounters, as they were not able to offer competitive prices and a broader range of products. Moreover, as supermarket chains owned by producers started to expand rapidly a year ago, the downward trend of traditional retail will be sustained. 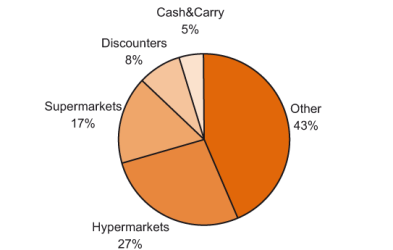 In the next three years, we expect that all modern formats will try to return to their double-digit growth. Even in the last three years, when the grocery market underwent major difficulties, modern retailers managed to gain a bigger market share. All the major players are planning to expand in the next few years.

Nowadays, major retailers cover most of the country’s largest cities and are moving towards smaller towns. Low levels of urbanisation, however, make it difficult for large-format retail to reach required profitability levels, something that is simpler to achieve for smaller stores. Thus, all modern formats have the potential of further expansion.

More information can be found in the report “Retail In Romania 2012” by PMR.