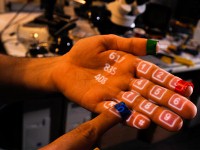 LONDON – Augmented reality, or AR technology has the potential to completely change the face of military combat, and can effectively eliminate the home ground advantage.

With its roots dating back to the introduction heads-up displays (HUDs) used in fighter aircraft, military applications of AR range from live fire training exercises to complex situational awareness systems encompassing features such as friend/foe identification, multiple sensory interfaces, location intelligence and interactive battlefield medical support. The military AR technology market will grow at a CAGR of 25 % over the next four years and will account for revenues worth 8.2 Billion USD by the end of 2016.

New report "Augmented Reality in the Battlefield 2012 - 2016" drawn up by Mind Commerce provides an in-depth analysis of the global military AR technology market including an assessment of the wider AR technology market, its applications in the battlefield, recent developments, vendor solutions and revenues forecasts from 2012 to 2016 on a global, regional and submarket scale.

More new market research reports by the publisher can be found at Mind Commerce page.