The largest volumes of n-butanol are obtained by Southwest Asia and North America-based companies. In 2010, they acquired 1.88 million tonnes.

The product also enjoys relatively high demand from consumers in Western Europe – above 700,000 tonnes were obtained here in 2011. 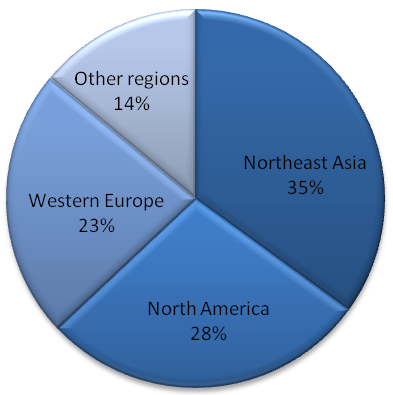 Asia and Europe were largest importers in the same year.

Russia is a key n-butanol manufacturer amid CIS countries. Its output was assessed at approximately 180,000 tonnes in 2011, showing a decrease by 6,000 tonnes, or 3.2% year on year.

The country exports around two thirds of the material produced on its territory. The exports amounted 128,000 tonnes in 2010, while a year earlier the figure below 101,000 tonnes.

However, certain volumes of the material are imported into the country. The imports were evaluated at 115 tonnes in 2011. The figure was 26 tonnes, or 29% higher than in 2010.

The global market for n-butanol is currently estimated at roughly 3 million tonnes. It will possibly expand by over 995,000 tonnes by 2020. The annual growth rate is set to average 3.25%.

N-butanol is primarily utilized in the production of butyl acetate. Downstream glycol ethers companies also widely utilize it in the manufacturing process.

More information on the N-Butanol market can be found in the report "N-Butanol (CAS 71-36-3) Market Research Report 2012".