The market for sulfur witnessed a sharp price hike in mid-February 2012 in China. Spot prices trended higher by over 3.9 percent to stop at USD 215 per tonne CFR.

Meantime, sulfur prices plunged in contracts for Q1, 2012 concluded on a CFR Tampa basis. They went down by 38.7 percent quarter on quarter.

China occupied the position of the major sulfur manufacturer in 2011. Its output volumes were above 9.56 million tonnes of sulfur content in 2011. The figure was similar to the indexes in 2010.

China’s demand for sulfur surpasses its capacity to a large extent. The consumption here reached 20.27 million tonnes in 2011, up by 200,000 tonnes from a year earlier.

As a result, the country imports significant volumes of the product each year. Sulfur imports were evaluated at about 13 million tonnes in 2010. A number of purchases from foreign suppliers are forecast to drop in 2012 on the back of the stricter export policy regarding triple superphosphate and nitrogen phosphate.

The global output of sulfur was above 69.48 million tonnes in 2011, showing a slight increase by 1.46 percent year on year.

Structure of sulfur production, by country, 2011 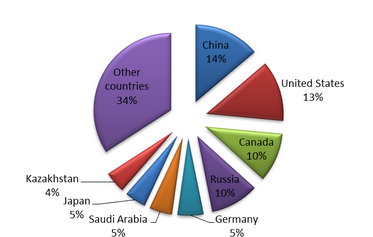 The sulphur output is predicted to be around 80 million tonnes in 2012. The average annual growth is expected to be 1.95 percent until 2016, with the largest increases in Asian and Middle East regions. However, the production dynamics may be affected by the overall economic instability.

Sulfur is mainly utilized in the fertilizers production. The chemical industry is another prominent downstream sector.

More information on the Sulfur market can be found in the report Sulfur Market Review.