London – The country’s e-retailing growth is being driven by the improving computer literacy rates and the internet capabilities of the young population. However, India has a low internet penetration with 6.05% in 2010. The major reason for this is that 70% of the Indian population resides in rural areas without the infrastructure for online services. During the review period (2005–2010), the number of internet users in India grew at a compound annual growth rate (CAGR) of 22.21%. According to the report “Consumer Attitudes & Online Retail Dynamics in India” by iCD Research, the average internet usage per week from the internet using population in 2009 increased from 9.3 hrs to 15.7 hrs. Government initiatives, such as the National e-Governance Plan (NeGP), State Wide Area Network (SWAN), Common Service Centers (CSC) and private initiatives such as the Google internet bus project, are attempting to bring internet awareness to the rural audience. 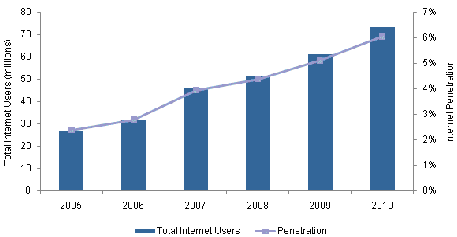 During 2010, the broadband penetration rate was 11.64% of the total internet subscriber base in India. This is significant because low speed internet can act as a barrier to online retailing, while high speed internet can allow users to browse through more websites and product categories before making a product purchase. However, broadband penetration is expected to increase in the coming months as companies start marketing wireless broadband networks based on Wimax and LTE technologies.

70% of the Indian population resides in rural areas. The increase in the number of people purchasing from online websites has been recorded in small towns and tier III cities. The major reason for this is that a broad range of products and services are now available online which were not previously offered to small towns with limited retail outlets. In light of this, the internet has brought more products and better discounts to small towns and cities. Rural areas currently account for 40% of the online retail sales, and with the growth of online services in rural areas it is expected that online retail sales will grow alongside this provision.

In 2010, 15% of Indian internet users access the internet through their mobile handsets. With the newly developed third-generation (3G) services being marketed by telecom operators, there will be more opportunities for accessing high-speed data connectivity and internet browsing through the mobile phones, following growth in 3G penetration. However, the 3G service is currently in its early stage of development and the service is costly, which acts as an obstacle to m-commerce.

More information can be found in the report “Consumer Attitudes & Online Retail Dynamics in India” by iCD Research.