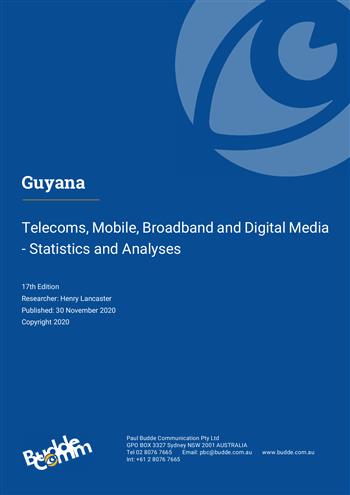 The only English-speaking nation in South America, Guyana has a small population which traditionally had one of the lowest GDP rates in the region. Although GDP growth had been steady in recent years, the sale of oil from offshore reserves which started in February 2020 promises to completely transform the economy. With good stewardship, oil revenue has the potential to lead to a major overhaul of the country's infrastructure, including the aging telecom networks.

The incumbent telco Guyana Telephone and Telegraph (GT&T, rebranded as GTT in late 2015) is controlled by the US-based Atlantic Tele-Network (ATN). The company competes with Digicel in the mobile market but retains a monopoly over fixed-line services. Although GTT's fixed-line monopoly was renewed for 20 years in December 2010 it drew to a close following the passing of the 2016 Telecommunications Act. However, since 2017 there have been delays in negotiations between the government and GTT relating to the terms of the market liberalisation and so the monopoly has been retained in practice: GTT still claims that it enjoys a monopoly on international voice and data services until 2030. Digicel is expected to launch competing services in the fixed-line market as soon as it is able to do so. In 2019 the government signed an MoU with ATN regarding licensing terms and the benefits expected to develop from market liberalisation. However, relations between the company and government are fraught, not least in relation to tax arears amounting to some $44 million.

Fixed broadband services have improved, especially since the opening of the SG-SCS submarine cable in mid-2010, but they are still comparatively slow and expensive, and the number of broadband subscribers remains small. The submarine cable proposed by Digicel would provide a second link to international cable infrastructure in the region and would go far in reducing consumer pricing. The government's plan to build a domestic network connecting government offices in remote and inland areas was halted by a newly elected government in 2015 and closed down in 2016, having been disastrously mismanaged. However, in the 2019 budget funds were made available to promote the use of ICTs for a range of e-government, e-health and tele-education services, as well as to build ICT hubs in remote areas affecting a number of communities.

BuddeComm notes that the outbreak of the Coronavirus has had a significant impact on production and supply chains globally. During the coming year the telecoms sector to various degrees is likely to experience a downturn in mobile device production, while it may also be difficult for network operators to manage workflows when maintaining and upgrading existing infrastructure. Overall progress towards 5G may be postponed or slowed down in some countries.