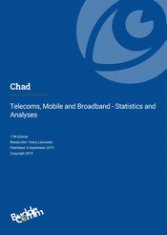 The Chad - Telecoms, Mobile and Broadband - Statistics and Analyses report includes all BuddeComm research data and analysis on this country. Covering trends and developments in telecommunications, mobile, internet, broadband, infrastructure and regulation.

During the last decade Chad’s economy has been dominated by oil exports, and as a result economic growth has been adversely affected by the falling prices for the commodity on international markets. Recent economic difficulties have been exacerbated by civil unrest and by an influx of refugees from neighbouring countries.

The country remains one of the least developed on the continent, while telecom infrastructure is particularly poor, with penetration rates in all sectors – fixed, mobile and internet – well below African averages. Nevertheless, despite difficult operating conditions, large scale poverty and low spending power, Chad’s telecom market offers some potential for investors to develop services given the low starting base.

The tax on mobile operators has been increased in stages in recent years, from 4% in 2014 to 7% in 2016. In January 2018 it was increased again, to 9%. Of this, the Treasury received 4%, the regulator 2.5%, the Information and Communication Technologies Development Agency (ADETIC) 1.5%, the National School of Information and Communication Technologies (ENASTIC) 0.6% and ANSCIE 0.4%. In addition to this tax an 18% excise duty was introduced in 2016 on telecom services, which resulted in lower usage among subscribers and consequently a negative impact on operator revenue. This tax was removed under the 2020 Finance Act.

The two main operators Tigo Chad and Airtel Chad have invested in infrastructure and have become the main providers of voice and data services. However, the difficult economic conditions of the country, compounded by taxes on telecom services which have adversely affected customer spend and operator revenue, encouraged these players to consider exiting the market. Tigo Chad’s parent company Millicom International entered into discussions with Orange Group in April 2017 and with Econet in the following October regarding a potential sale, while in May 2017 Bharti Aircom announced that Chad was one of its regional markets which it considered offloading. Tigo Chad was sold to Maroc Telecom in June 2019 (though the unit retains the Tigo brand for now), marking the latter’s entry into a market which it has shown an interest in since 2014.

The mobile sector has developed steadily under the auspices of these two operators. The national telco and fixed-line operator Sotel Tchad (ST) operates the country’s third mobile network, as Salam Mobile, though it is mainly focussed on voice services since it depends on GPRS and EDGE technologies (which can provide only basic mobile data services). The country’s first 3G/4G mobile licence was awarded in April 2014.

Chad finally gained access to international fibre bandwidth in 2012. Its national backbone infrastructure remains underdeveloped. The World Bank-funded Central African Backbone (CAB) project takes in Chad, while the country is also party to a Trans-Saharan Backbone project which will link a fibre cable to Nigeria and Algeria. Investment in the national backbone is continuing and though progress across all 12 sectors has been hampered by delays a major link was opened in September 2019.