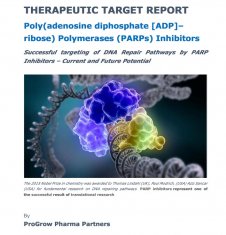 Poly(adenosine diphosphate [ADP]–ribose) polymerases (PARPs) activity is essential for the repair of damaged DNA. The DNA repair pathway is defective/mutated in several cancers (BRCA1, BRCA2 ovarian and breast cancer, etc) and further impairing this pathway by PARP inhibitors in these cancers is the basis of developing DNA repair targeted therapies. In the Last four years three drugs targeting PARPs have been approved for Ovarian Cancer (BRCA mutant) and new clinical data supports further label expansion of this class of drugs in other solid tumors. PARP inhibitors have demonstrated clear patient benefit in germline BRCA (gBRCA), Homologous Recombination (HR)-deficient, and other ovarian cancers. The market opportunity of this class of drug in the approved Ovarian cancer indication itself is large and the best is yet to come from the label expansion in other cancers- Prostate, Breast, Lung, Endometrial, Pancreatic, GlioBlastoma Multiforme (GBM), , etc. as a monotherapy or in combination with other targeted drugs. The innovator companies have pegged the market opportunity of this class of drugs beyond $5bn which should trigger M&A activity at attractive terms for them. In this report, we highlight the rationale of inhibiting PARP in different cancers and the promising clinical data. Clinical progress of PARP inhibitors as a monotherapy against tumors with existing DNA repair defects, such as BRCA1 and BRCA2 and other mutations, and as a combination therapy when administered with other targeted therapies as well as chemotherapeutics that induce DNA damage.
1. EXECUTIVE SUMMARY