LONDON – Although the reduction of coal-fired power generation is one of the major climate policy goals in a rising number of countries, coal still commands a great share (appr. 27%) of the world’s total energy mix and is the second leading energy source after oil. However, the share of coal in the global power mix is expected to decrease from 27% to 25% through 2023, primarily owing to the increasing usage of natural gas and renewables, rising number of climate and air-quality policies, phase-out announcements, and coal divestment campaigns.

Nevertheless, coal remains the key source of energy in many countries across the globe due to its abundant reserves and affordability. For instance, in Indonesia coal commands a share of 58% of the country’s electricity production, in India – 75%, in South Korea – 46%, in Malaysia – 45%, in Turkey – 33%, to name a few countries with high consumption of coal for energy generation.

Presently, the world’s proven reserves of coal are estimated at around 1.1 trillion tonnes. Coal deposits are present in almost every country from pole to pole, with recoverable reserves found in nearly 70 countries. The US boasts the largest coal reserves worldwide, accounting for a share of around 24% of the world’s total. The second and third largest reserves of coal are found in Russia and Australia with shares of 15% and 14% of the global coal reserves, respectively. Abundant coal deposits are also located in China (13%) and India (9%).

In 2013, the volume of global coal consumption climbed to the record high level and exceeded 3.86 billion metric tons (BMT) of oil equivalent. However, it registered a modest decline during 2014-2016. After three consecutive years of decline, the world’s consumption of coal added 1% YoY in 2017 and totaled some 3.73 BMT of oil equivalent. This is majorly attributed to the stronger economic growth encouraging higher industrial output as well as electricity use. As of 2018, the world’s coal demand registered positive growth, supported by the soaring coal power generation in India and China.

Looking forward, the demand for coal is poised to remain stable in the next 5 years, with drops in the US and Europe offset by an upturn in the emerging countries especially in the Asian region (despite India and China, significant gains in coal consumption are anticipated in Vietnam, Indonesia, the Philippines, Pakistan, and Malaysia).

Structure of the global coal consumption by country, 2017 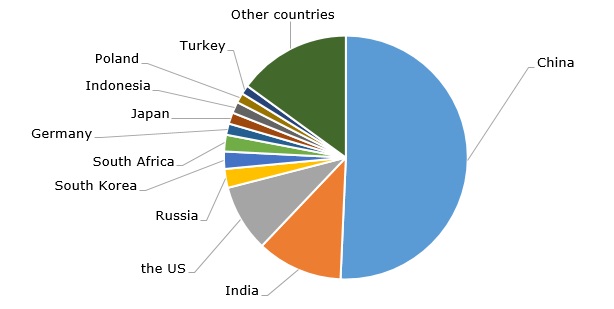 The world’s production of coal experienced a decline during 2014-2016 and totaled slightly over 3.66 BMT of oil equivalent in 2016. However, in 2017, it bounced back and registered a positive YoY increase – it exceeded 3.76 BMT of oil equivalent. The year 2018 also witnessed a marginal increase (appr. 0.1%) of global coal production. India, Russia, and Indonesia were the major contributors to the upturn of coal production during recent years. Although the world’s production of coal registered positive growth in 2017 and 2018, it hasn’t yet managed to reach historic levels; this is majorly explained by the withdrawal (partial or complete) of several mining companies from the coal business.

There are over 300 coal projects planned to commence operations from 2019 to 2022, with 92 of these projects already under construction and the remainder in different stages of development. 57 of all scheduled projects are located in Australia, 55 – in India, 54 – in China, 30 – in South Africa, 18 – in Canada, 18 – in Indonesia, and 15 – in the US. However, the impact of these new launches will be partially offset by phasing out of about 100 coal projects during the same period of time, including 13 in Australia, 13 in the US, 14 in South Africa, 15 in China, and 34 in India.

Structure of the global coal production by country, 2017

Notwithstanding the ecological harms associated with coal activities, coal still plays a paramount role in the global power generation – it is critical in ensuring access to affordable energy in a great number of countries. Therefore, it is essential to discover an approach that marries strong ecological policies with innovative coal mining and processing technologies in order to tackle essential climate goals, respond to the urgent health effects of air pollution and, at the same time, ensure that more people across the globe have access to affordable energy. As the global need for coal continues to gain traction, it is significant to introduce long-lasting technological solutions that will push the coal sector to a path that would allow it to better respond to future global challenges.

In the next few years, the world’s coal market is projected to remain well supplied, with no sizeable changes in output across the key producing countries. Asia is poised to register the highest coal demand growth in the offing. Propelled by the expanding manufacturing capacities, mounting demand for electricity, and rising economic growth, the world’s coal market is forecast to grow at a CAGR of nearly 12% in the next 4-5 years.