Russian Retail Market was Worth USD 627 Billion in 2012, Claims PMR

In 2012, the Russian retail market increased by 12% year on year and was worth RUB 18.4tr ($627bn). According to the report “Retail in Russia 2013 - Regional focus” by PMR, the Central Federal District remained the leading region in terms of retail turnover, accounting for approximately one-third of the country’s sales.

The retail market of Russia has undergone changes in the pace of development in the wake of the financial crisis. Although there has been constant growth in the retail industry, there was a sharp fall in the growth rate from 28.3% in 2008 to 4.7% a year later. In 2010 and 2011, the market boasted double-figure growth. In 2011, the retail market increased by almost 16% in comparison with 2010 and was worth RUB 16.5tr ($562bn).

In 2012, the Russian retail industry was worth RUB 18.4tr ($627bn). This relatively moderate year-on-year increase of 12% reflected the noticeable slowdown of the Russian (and global) economy, in Q4 in particular, when GDP in Russia reached 2.3%.

In 2013, as the global economy begins to recover, PMR forecasts that Russian economic growth will accelerate to 3.8%, although there is a risk of slower growth associated with external factors (such as slower recovery in the Euro Area and flat oil prices) and internal factors. In 2014 and beyond, GDP growth should accelerate to about 4%, as growth in the global economy also accelerates. According to a forecast by the Ministry of Economic Development, retail will remain the growth driver of the economy in Russia over the next few years. Nevertheless, PMR suspects that the market is unlikely to regain the rates of growth achieved before the crisis. Whereas growth is likely to endure on the Russian retail market, its pace will remain at the current figure of approximately 12% year on year.

The Central Federal District is traditionally the leader in terms of retail turnover, as it boasts one-third of the country’s sales. In addition, the district is almost twice as large as the Volga Federal District, the second-largest retail market in Russia, which generates 18.3% of the country’s turnover. The smallest retail market in Russia is the Far Eastern District, which accounted for less than 4% of total sales in 2012. 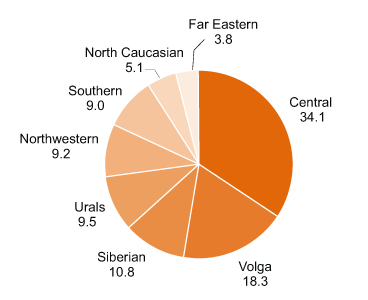 The financial crisis of 2008-2009 affected the share accounted for by the Central Federal District as a proportion of total retail sales in Russia. The least substantial share was recorded in 2008, when the district accounted for 33.4% of the country’s turnover. Between 2009 and 2011, the Central Federal District recovered more rapidly after the financial crisis and there was a stronger rate of growth in retail sales in comparison with other Russian districts. As a result, in 2011 the district accounted for 34.6% of the total turnover of the country. A year later, the figure reached 34.1%. PMR expects that between 2013 and 2015 the share of the district as a proportion of the country’s total retail sales will continue to grow, but at a lower rate. The statistics clearly show the Central Federal District’s market saturation, and by 2015 a peak of 34.7% is expected to be reached.

More information can be found in the report “Retail in Russia 2013 - Regional focus” by PMR.