Road Building Segment to Be the Biggest Drag on Capital Expenditure in 2013 in Poland, Expects PMR

The number of construction projects planned declines in most of the Polish voivodships, with the reduced number of road building projects exerting the strongest impact. Mazowieckie and Pomorskie are the regions where the average growth in projects planned is the highest. Lodzkie, Zachodniopomorskie and Warminsko-Mazurskie are at the opposite end of the spectrum from the leading regions.

According to the report “Construction Sector in Poland 2013 - Regional Focus” by PMR, the total volume of investment projects planned to take place in the Polish regions in 2013 has shrunk significantly. Notwithstanding that, there will be many interesting projects offering an opportunity to tap into income sources to all participants of the building process even during the slowdown.

H1 2012 data on building permits shows that the road building segment will be the biggest drag on capital expenditure in 2013 as it recorded a 37% decline in the number of road infrastructure projects planned. In some regions, the number of contemplated structures dropped by more than 50%. On the other hand, the number of road building projects is expected to grow in the voivodships of Mazowieckie, Slaskie, Pomorskie and Opolskie. Projects which were originally expected to be finished for Euro 2012 but were eventually delayed or need a new contractor to be appointed will be a boosting factor that will strengthen the road building segment in 2013. This applies in particular to the A1 and A4 motorways.

A less severe downturn in capital expenditure was recorded in non-residential construction as the floor space of the planned projects dropped by a mere 5% at the national level. The strongest growth was posted by the Kujawsko-Pomorskie and Wielkopolskie voivodships (32% and 9%, respectively). In turn, Warminsko-Mazurskie, Opolskie and Malopolskie were the regions which recorded the steepest falls in non-residential construction projects planned.

Conversely, residential construction continued to post strong performance and recorded marginal growth in H1, though it should be noted that the subsequent months saw declines in the number of housing units planned. The situation in Podlaskie and Opolskie, which are the regions less dependent on developers and more on individual investors, appears to be relatively the best. 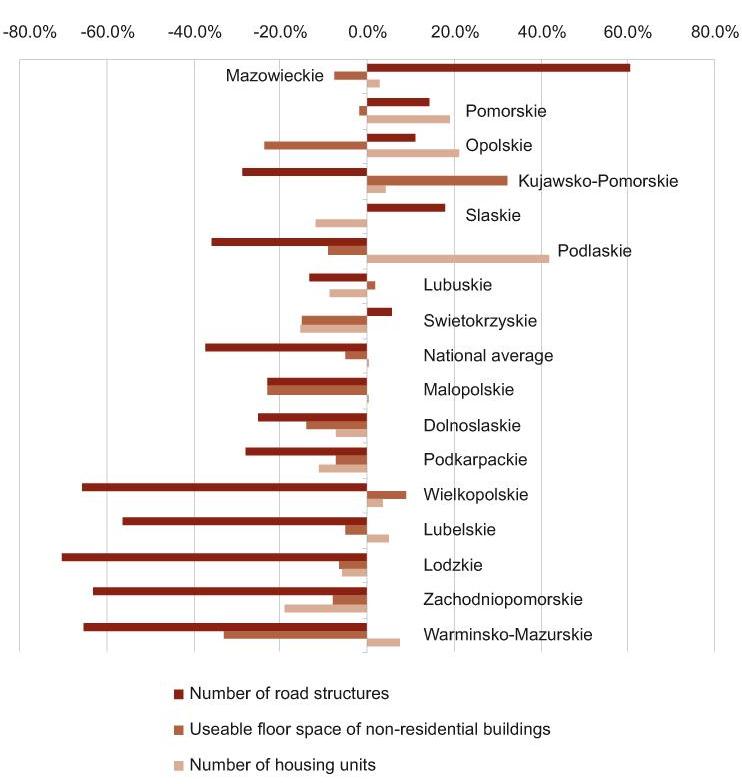 More information can be found in the report “Construction Sector in Poland 2013 - Regional Focus” by PMR.