Growth in Russian Construction Industry Set to Accelerate, According to PMR

In the near-term, the growth in Russia's construction industry is expected to accelerate. It will be mainly fuelled by state-funded civil engineering projects, most for the development of the country’s transport and heavy industry infrastructure. Of high priority will be projects deployed in regions with a vast natural resources potential. The Siberian, Urals, and Far Eastern Federal Districts are expected to be the major beneficiaries.

According to the report “Construction Sector in Russia 2013 - Regional Focus” by PMR, the Far Eastern Federal District is expected to have the fastest developing construction market of all federal districts over the next three years. On average, construction output is forecasted to rise by 12.5% annually, mostly due to a low comparison base and the government’s commitment to accelerating transport infrastructure construction initiatives in the district. In recent years, the major consumer of construction projects in the Far Eastern Federal District was Primorsky Territory, which benefited from multi-billion investments in transport infrastructure projects rolled out as part of preparations for the 2012 APEC summit held in Vladivostok. In the coming years, most construction projects will be implemented in the Republic of Sakha-Yakutia, which, although possessesing huge reserves of oil and gas resources, has difficultly in capitalising on them partly due to the greatly underdeveloped transport infrastructure in the area. There are only 10 km of roads per 1,000 km? of territory in Far Eastern Federal District, and 6.7 km in Yakutia, significantly below the country's average of 64 km. The region's key investors in heavy industry projects will be Gazprom, Surgutneftegaz and Rosneft. Gazprom is involved in the construction of the RUB 430bn ($14.3bn) Yakutsky Centr-Kabarovsk-Vladivostok gas pipeline, planned to be completed by 2016. Surgutneftegaz is actively developing the Talakan oil and gas field in Yakutia, where it plans to invest more than RUB 400bn by 2025.

Strong growth will be recorded in Siberian Federal District. There, the construction market is estimated to grow on average by 11.3% annually. Unlike Far Eastern Federal District, where the market will be supported overwhelmingly by the civil engineering segment, the construction market's development in Siberian Federal District is expected to be more balanced, with the highest average growth likely to be achieved by the non-residential construction segment. This segment is driven mostly by industrial construction projects. The district’s abundant natural resources supports the development of industrial plants in most economic sectors. According to PMR estimates, the non-residential construction segment was responsible for about 32% of the district’s construction output in 2011. However, in 2012 its influence eased to 25% mostly on the back of modest activity witnessed in the office and shopping centre construction segment. Nevertheless, in the near-term, office and shopping centre construction activity is expected to recover. The most developed city in the district in terms of GLA in shopping centres per 1,000 inhabitants is Omsk, where by the end of 2011 this indicator reached 326 m?. It is followed by Novosibirsk and Krasnoyarsk with 271 m2 and 267 m2 respectively. An important number of large shopping centres are expected to be completed, including Torgovy Kvartal (117,000 m2) in Krasnoyarsk, Planeta (96,000 m2) in Novosibirsk, and Arena (80,000 m2) in Barnaul (Altay Territory). Construction of small-scale schemes will dominate the district’s retail real estate market in the years to come, but development of large-scale projects will be on the rise as well. Although the district has an important number of large cities, most of them are low saturated with shopping centre spaces. 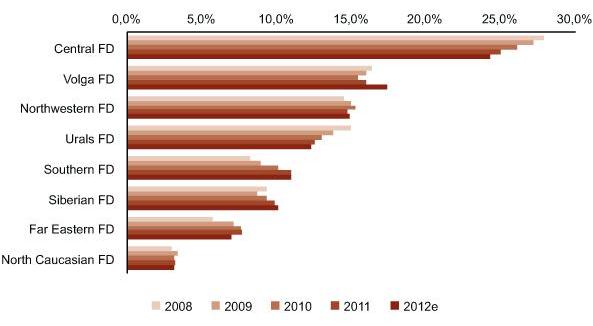 Strong expansion of the construction activity will also be witnessed in Urals Federal District. The district's construction market is dominated by the civil engineering segment. According to PMR analysts, this is responsible for about two-thirds of markets output, largely supported by investment in heavy industry. Tyumen Province, including Yamal-Nenets and Khanty-Mansi Autonomous Districts, is also called the oil and gas region of the country. In addition, Chelyabinsk Province is one of the key metallurgical regions in Russia. In the years to come, the market will continue to expand largely on the construction of related infrastructure for the development of oil and gas fields in Tyumen Province. By 2030, RUB 6.4tr ($212bn) is to be invested in the development of several oil and gas fields in Khanty-Mansi Autonomous District including:

In addition, Gazprom plans to spend about RUB 2.4tr by 2030 on developing related facilities for the exploration of natural gas reserves on Yamal Peninsula.

Less impressive market growth rates will be recorded in Southern Federal District, where growth is expected to rise on average by 2.3% during 2013-2015. This weak performance will come after a period of large-scale investments as part of preparations for the 2014 Sochi Olympics, which must to be completed by the end of 2013.

More information can be found in the report “Construction Sector in Russia 2013 - Regional Focus” by PMR.