The telecoms market in CIS countries and Georgia is expected to keep up its healthy growth in 2013-2014. ISP services’ share of the telecommunications revenues will increase, the quality of the services is expected to improve and prices will fall. The development will be driven by the expansion of Russian companies in the neighbouring states. According to the report “Telecommunications Market In CIS Countries 2012” by PMR, the Russian telecommunications market has reached maturity and mobile operators have started to look at the possibility of further expansion.

The telecommunications services market in CIS countries and Georgia amounted to approximately €10.3bn in 2011, which means a growth of 1.3% y-o-y. Based on the results of H1 2012 and current market development trends PMR estimates that the market increased to more than €11.2bn in 2012, which is 9.5% more in comparison with the previous year.

Value (€ bn) and growth rate of the telecommunications services market in CIS countries and Georgia, 2005-2012

“According to our preliminary data all key market segments, including fixed and mobile telephony and internet access services, have shown some increase in 2012. At the same time valuation of the market in EUR does not reflect its real growth as in some of these countries the strengthening of the local currencies inflate market value. The fastest growing in 2012 were telecommunications services markets in Turkmenistan followed by Kazakhstan and Georgia” – comments Pawel Olszynka, Head ICT Analyst at PMR.

Value (€ bn) of the telecommunications services market in CIS and Georgia by segments, 2005-2012

The growth of the market in Turkmenistan has been based on the increase in the sales of mobile telephony services after the return of Russian mobile operator MTS to the local market. Turkmen authorities stopped the licence of MTS in the country at the end of 2010 and only in Q2 2012 did the operator agree to fulfil the conditions for the recovery of its business.

Georgia and Kazakhstan have enjoyed booming demand for internet access services as well as an increase in the consumption of mobile telephony explained by the sharp decline of mobile telephony prices in 2011 with the expansion of the third operator on the market. Growth in other CIS countries has been driven by a mix of boom on the ISP market and organic increase in the demand for mobile telephony services. In Belarus the market declined by 5.5% y-o-y to an estimated €967m in 2012. However, this decrease is explained by the devaluation of the Belorussian Rouble to the main currencies in 2011.

The telecommunications markets in the CIS countries and Georgia are different in size, maturity, availability, quality and prices of the main services. Market attractiveness for the investors, and as a result the development of fixed or wireless infrastructure in the countries, is closely connected to the geographical conditions and economic development as well as to liberalisation of the regulatory environment and cultural differences of the CIS countries. Therefore, Moldova, which has a common border with the EU states and high population density, has a strong advantage for the development of telecommunications services and has made a significant step forward in this area, despite being less economically developed in comparison with other CIS countries.

Besides Russia, the biggest CIS country by population is Ukraine, with 45.6m people in mid-2012, followed by Uzbekistan and Kazakhstan. The smallest countries are Moldova and Armenia. These states, however, have the highest population density, exceeding 100 people per square kilometre. Countries like Kazakhstan and Turkmenistan have a huge territory but relatively small number of people who live in several big cities and in a number of small villages located throughout their territories.

Population (m) and density of population (people per 1 km2) of CIS countries and Georgia, July 2012 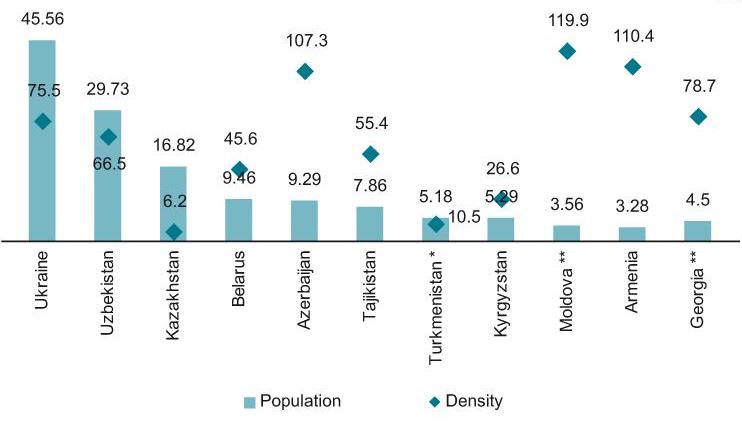 Despite the demographic statistics in every CIS country being presented by the official statistical bodies, the figures in some of the states do not measure the real situation. In Moldova, the statistics include all holders of Moldovan passports in spite of the fact that more than one million Moldovans work abroad and many of them also have Romanian, Russian or Bulgarian passports. As such, these people are often not going to return home. Indirect assessments show that the permanent population of Moldova does not exceed 2-2.5m people. The situation is similar in Azerbaijan, Georgia and Tajikistan – all of which have suffered from a huge illegal emigration of population to Russia. It is believed that the Tajik authorities are unable to effectively control their population and approximately two million people have left the country to work abroad. Azerbaijan and Georgia are believed not to provide reliable data as the authorities of these countries are interested in showing a larger population for political reasons. At least the total volumes of consumption of non-elastic basic social products in the country including wheat, electricity or natural gas are much lower than in the Soviet times, when these countries had even smaller populations than is declared now. However, the demographic statistics of Ukraine, Kazakhstan, Uzbekistan, Belarus, Kyrgyzstan and Armenia are more accurate.

An important demographic indicator that impacts the development of telecommunications markets in CIS countries is the level of urbanisation. In every CIS state there is a significant difference between the urban and rural lifestyle, the development of economic and telecommunications infrastructure and in the incomes of the urban and rural populations. In the CIS, people in the big cities enjoy affordable access to fixed and mobile telephony and the internet while in the rural areas very often there are not even a sufficient number of fixed telephony lines or adequate mobile telephony coverage. As a result, countries like Belarus or Ukraine, where most of the population lives in urban areas, have well-developed telecom infrastructure and networks and relatively cheap telecommunications services. The same applies to the countries with a high density of population and good geographic locations like Moldova and Armenia. In the other CIS countries, including Kazakhstan and Tajikistan, with a significant share of rural population, it is not economically feasible to develop fixed-line networks outside the biggest cities while huge distances between the cities or to the main regional economic centres make the maintenance and operations of backbone lines expensive.

In most CIS counties the rate of urbanization is increasing as people migrate from villages to cities. However, in some of the countries, including Tajikistan and Moldova, there is a different process. The economic crisis leaves fewer employment opportunities there, especially in the smaller towns, forcing people to return to the villages. Finally, another trend that will impact the market in the mid-term period is that the population of European CIS countries including Ukraine and Belarus is declining. The sharpest decline is registered in Ukraine, which in the past six years has been losing approximately 200,000 people every year. The population of Moldova (officially reported) and Armenia remain almost stable while the populations of Middle Asian countries and Azerbaijan are growing quickly.

More information can be found in the report “Telecommunications Market In CIS Countries 2012” by PMR.