In 2011 sales of the in vitro diagnostics (IVD) market totalled nearly PLN 1.3bn (€316m) in Poland, up by 9% year on year. The market will grow at a rate of up to 10% annually in the years to come, according to the new report “In Vitro Diagnostics Market In Poland 2012” by PMR.

National reimbursement policy has a significant effect on the diabetics products segment and the event that had the greatest impact in recent years was the introduction of the new list of reimbursed drugs from 1 January 2012. This list did not include testing strips from leading manufacturers such as Roche and Abbott. In connection with the announced removal of these products from the list, which would lead to higher prices for the patient, at the end of 2011 patients bought diagnostic tests from pharmacies in massive quantities. These products returned to the list of refunded products on 1 March 2012.

Incidence of diabetes (a metabolic disorder which is a social epidemic in developed societies) is growing. Data from the Polish Ministry of Health indicates that there were around 2 million diabetics (6.5% of the population) in Poland in 2011 and this number will double over the next 20 years.

Reagents in the first place

Sales of reagents accounts for the largest portion of IVD market in Poland in terms of value and in 2011 its share grew by 7 p.p. compared to 2008. “In the opinion of PMR this is a result of the fact that the recent economic downturn meant that healthcare facilities purchased equipment less frequently but the research for which these reagents are required, still had to be carried out” says Agnieszka Skonieczna, PMR Senior Pharmaceutical Market Analyst and the report co-author. In general, the structure of the Polish market is similar to the structure of IVD markets in other EU countries. 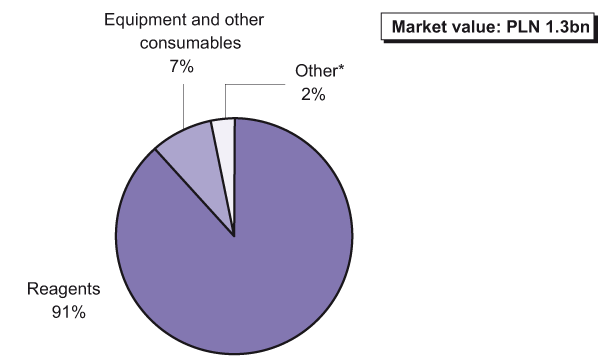 Will the commercialisation of healthcare facilities be an opportunity for the market?

Changes in the IVD market may be affected by the commercialisation of healthcare facilities. First of all, doctors in private surgeries order an average of 6-7 tests per sample, while in public institutions the corresponding figure is three tests per sample.

In addition, as part of cost-reduction measures, the new owners of restructured healthcare facilities may also decide to outsource their diagnostic laboratories. This will lead to a change in the ownership structure of laboratories, as well as investment in laboratory diagnostic equipment. Frequently, the contractor may also agree to modernise the laboratory and purchase equipment as part of the outsourcing agreement.

Finally, after commercialisation, and particularly after acquisition by a private medical company, some hospitals obtain funds to upgrade and purchase equipment (including IVD equipment). Such investments are also needed if the facility plans to compete with some modern and well-appointed non-public hospitals.

More information can be found in the report “In Vitro Diagnostics Market In Poland 2012” by PMR.