A survey of the largest Polish companies active in the IT industry was conducted by the research division of PMR for the purposes of the report “IT market in Poland 2012”. This was already the ninth survey of the executive staff of the largest IT enterprises in Poland. It covered 101 out of the top 300 IT businesses.
/

The main goal of the survey was to collect information on the current situation on the Polish IT market and estimate this market's growth prospects for the next two years. It was also aimed at identifying the likely development directions and the most promising segments of the industry. Additionally, an attempt to determine the crucial factors contributing to the improvement of the situation on the Polish market and the main barriers to its growth was made.

The other purposes of the survey included examining the situation on the IT outsourcing market and the assessment of its growth prospects for the years 2012-2013. The survey was also to provide information on IT exports by the largest Polish IT companies. In connection with the Euro 2012 Football Championships organised in Poland and Ukraine the representatives of the top Polish IT companies were asked about the benefits which this event brought to the Polish IT sector. For the first time the report covers so broadly the area of cloud computing services – the representatives of companies with such offer in their portfolio discussed their growth prospects, the most frequently selected services, and the type of clients using such solutions. Opinions were also collected on the on-going developments on the Polish IT market: Asseco Poland's attempt to acquire Sygnity and the establishment of the Ministry of Administration and Digitisation. The growth rate of the wages in the IT sector was assessed, as well. With a view to capturing the changes taking place on the IT market in Poland over the last months the findings were compared to the findings from the previous years. 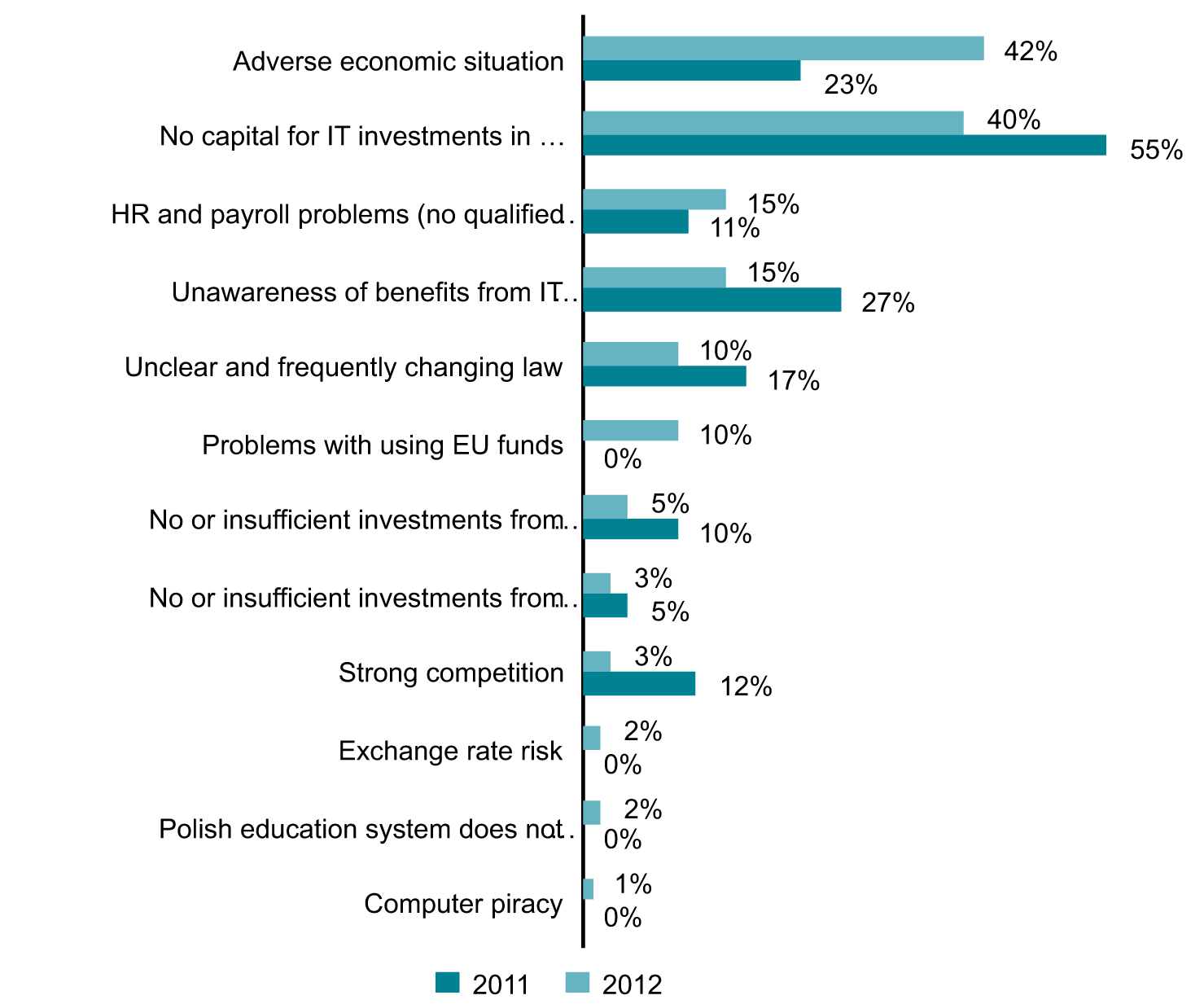 This year's survey shows clearly that in the opinion of the representatives of the IT businesses in Poland the greatest growth barriers for the sector are, in principle, two issues: difficult economic situation in Poland (42%) and the resulting lack of IT investment capital in enterprises (40%).

Other categories are mentioned by a considerably lower number of enterprises and they also refer to more diverse issues. Every seventh company (15%) points to the low awareness of the benefits from IT investments as a factor hindering the market growth (this also represents a decline of 12 p.p. compared to 2011). The same number of entrepreneurs mentioned HR and payroll problems, primarily linked with finding qualified staff; the respondents referred to high labour costs and the tax burdens in general limiting the companies' growth. One in ten respondents pointed to limitations caused by the difficulties in using EU funds, absence of detailed information on IT investment co-financing possibilities and the imprecise, frequently changing Polish law (10%).

As the question was open-ended (i.e. the question was read out to the respondent but no responses were suggested), a lot of interesting remarks were obtained which are impossible to present in a statistical analysis. The adverse economic situation affects the sector in many ways. It leads to uncertainty among potential clients who, concerned about the financial standing of their companies, suspend IT investments (which, as demonstrated by the responses obtained during the survey in 2011, are still underrated from the viewpoint of enhancing business profitability). It is also difficult to obtain loans for this type of investments. Another factor linked with the present situation is the exchange rate risk, complicating the valuations and profit calculations in projects implemented within a longer time-frame.

It should be noted that 56% enterprises emphasised only one growth barrier, 44% two, 14% three, 7% four, 2% five. This may imply that the companies perform well in the circumstances currently prevalent on the Polish IT market and are able to cope with the encountered problems relatively efficiently, especially as the two basic growth barriers are connected with general issues affecting the entire economy, not only the IT market.

Growth prospects for individual segments of the IT market

The respondents estimated the growth prospects of the individual segments of the IT market. This year they were asked for the first time about the market of applications for mobile devices which was ranked highest in this year's survey. The survey questions referred to:

At present two areas seem to be offering the best growth prospects for the IT sector – applications for mobile devices and cloud computing. Virtually all respondents expect the growth of the former – 92% of them anticipate dynamic development, only one of the respondents does not expect this area to grow in the near future. In the case of the cloud computing segment the response structure changed compared to the previous year – the share of extremely positive responses expanded by 13 p.p. As in the previous survey, 95% respondents were convinced of the growth of this type of services over the next two years.

In the case of e-commerce, IT security services or SaaS, the respondents begin to take increasingly extreme positions. While the opinions that these sectors will keep growing still prevail, the shares of the extremely positive responses and of the more conservative ones are increasingly close to an equilibrium; also the number of respondents believing that those sectors will not grow in the next two years is rising. The reduced forecasts for IT security services are surprising, especially as in the previous reports their share was steadily growing (the share of the response "dynamic growth" – 41% in 2009, 52% in 2010 and 58% in 2011).

The relatively weakest prospects were indicated for such segments as ERP, CRM and BI software, training services or Green IT. They received the largest proportion of opinions pointing to the absence of dynamic growth in the next two years and in the case of ERP software and Green IT the lowest one-digit share of opinions referring to definite growth was recorded. On the one hand, this may result from the high penetration of the solutions (ERP) among businesses actually needing this type of systems, but on the other hand this may imply a change in the enterprises' approach to spending on IT (less emphasis on the "ecological" aspects of a project). The collected opinions concerning the prospects of the software for SMEs, mainly ERP, CRM or BI systems, confirm the conclusions of the report "Software applications, ICT services and infrastructure in SMEs in Poland" – based on the survey of 800 SMEs – pointing to high saturation of the potential clients with this type of products.

Establishment of the Ministry of Administration and Digitisation

On 18 November 2011 a new Polish ministry was established, responsible for such issues as the development of the information society, supporting IT technology development, digitisation of the Polish administration etc. Such an apparently desirable authority has not been appreciated by the representatives of the top IT companies in Poland as yet. It should be noted that every third respondent (34%) was not able to evaluate the Ministry's activity so far, while a similar proportion assesses it as moderately successful (32%).

Assessment of Activity of the Polish Ministry of Administration and Digitisation to Date (%), 2012 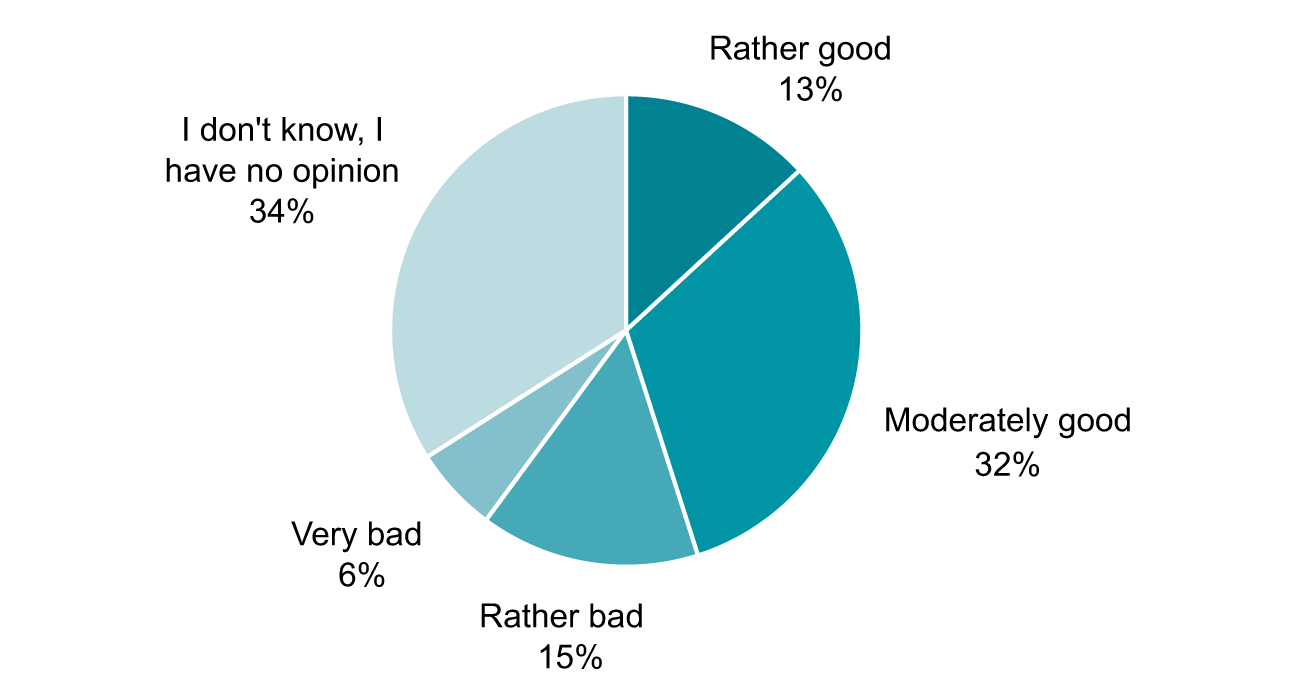 The respondents were asked to provide a list of tasks which the new authority should undertake. Since the question was open-ended, the responses were coded as belonging to several most popular categories. The most valuable opinions will be quoted under the chart. The respondents generally agree as to the course of action which the Ministry should pursue. In accordance with its defined mission it should support IT development on many levels – from "digitising" the administration and public authorities to encouraging infrastructure development, legislative support for new technologies or simply efficient and effective implementation of statutory solutions.

Most of the suggestions refer to the informatisation of government and local government administration – it was emphasised by almost one in four respondents (24%). Exactly the same number of responses referred to issues related to improving the law and supporting legal regulations aimed at propagating new IT solutions. Despite their negative appraisals the respondents hope that the authority established especially for such purposes will actually execute the tasks it has been entrusted with (13%). One in eight respondents pointed to the need of digitisation in the dimension of contacts between the client and the authorities so that at least part of the official business could be done through the internet.

List of the Expected Activities of the Ministry of Administration and Digitisation (%), 2012 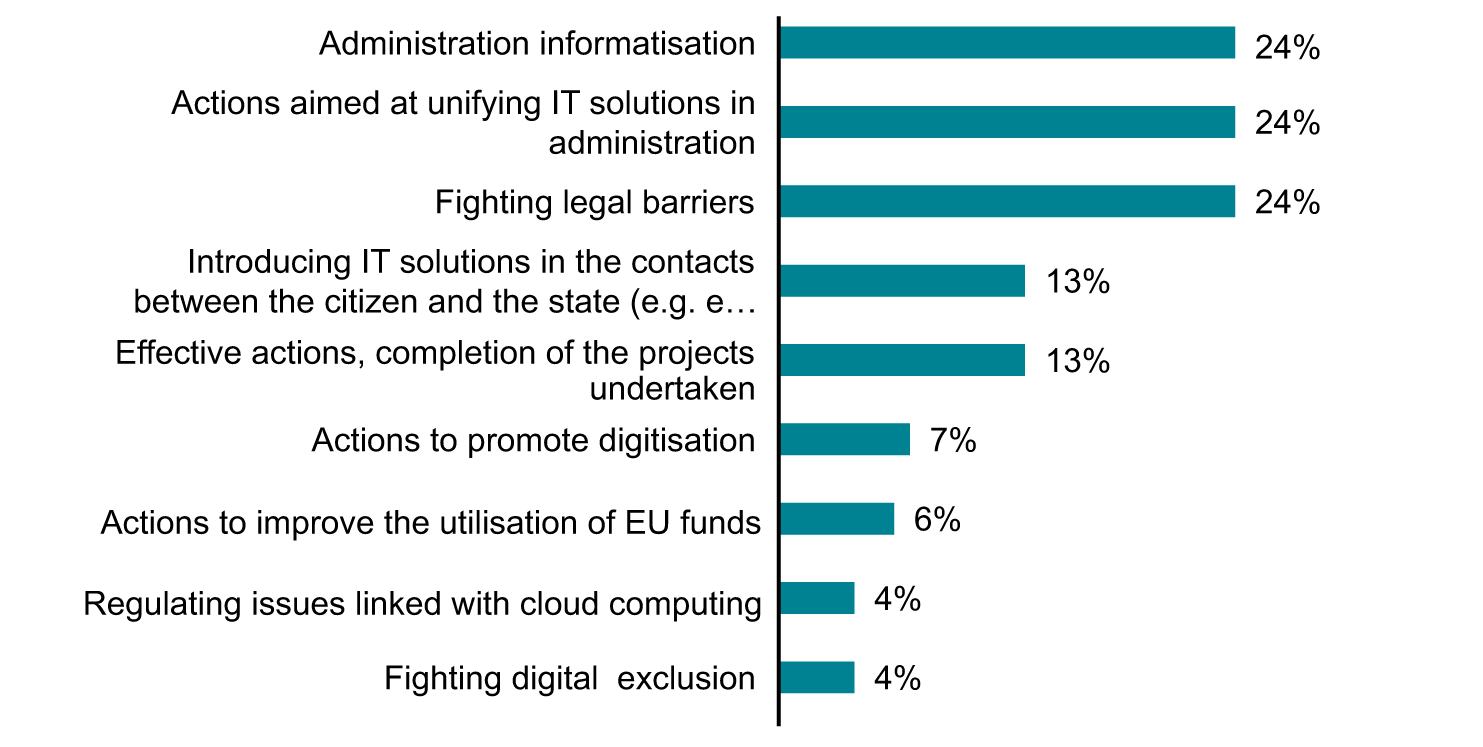 Examples of opinions by the respondents include: "Greater unification and broader information campaign on unifying IT solutions by communes and voivodships", "The so-called digitisation should not be so widely discussed, it should be pursued through raising real funds for developing broadband networks, e-administration and e-services and putting this money to good use. Focus is needed on the completion of the strategic projects because they are permanently delayed and indefinitely postponed", "Investment projects related to the digitisation of healthcare, digitisation of administrative processes, improvement of the client-citizen-state relations, facilitating administrative processes in ZUS and tax offices".

More information can be found in the report “IT market in Poland 2012” by PMR.