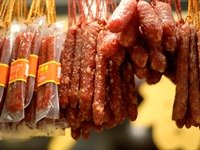 LONDON – Russia’s sausages production witnessed positive dynamics in 2011. It grew by approximately 5 percent Y-o-Y. A larger increase was in 2009 when the output escalated by 16 percent. Boiled sausages production is one of the key segments of the sausage sector in Russia. The segment is evaluated at above 25 percent. The domestic boiled sausages output was around 650,000 tonnes in 2007 and went up to 700,000 tonnes a year later. In 2009, Russian manufacturers produced only 640,000 tonnes.

More New Insightful Reports on Sausages Demand in Russia by Express-Obzor are Available:

More new market research reports by the publisher can be found at Express-Obzor page.