Total Clothing & Footwear Retail in Six Largest Central Europe Markets to be Worth More Than €14bn in 2014, Finds PMR

It has been estimated that in 2011 the fashion market in the six Central European (CE) countries was worth almost €13bn, only 1% more than the previous year when expressed in local currencies, but slightly less in euro. Half of this was generated in Poland. The ten largest companies accounted for 28% of the clothing and footwear market in the CE region last year, and Inditex turned out to be the market leader, as it was revealed in the latest PMR report “Clothing and Footwear Retail Market in Central Europe 2012”.

The market developed, albeit at a sluggish pace, between 2010 and 2012. All of the fashion markets in the CE region, with the exception of Poland, have observed figures lower than those achieved in the record year of 2008. Positive growth did not return to all of these markets last year, and some are expected to decline in terms of value this year. However, the medium-term outlook seems less bleak. PMR forecasts suggest that there should be a modest improvement on the market in Central Europe over the next two years. Between 2011 and 2014, Poland and Romania are set to record the highest sales growth rates in clothing and footwear: 11% and 10%, respectively. They will be followed by Bulgaria’s 9% increase over the next three years. “Still, the clothing and footwear expenditures per capita forecast for 2014 for Bulgaria and Romania are to account for only 40% of the average amount spent on apparel in the remaining four CE countries covered in the report,” adds Dominika Kubacka, PMR Retail Analyst and co-author of the report.

The Spanish concern Inditex, the world’s leading clothing and footwear retailer, led also the field among the largest players on the Central European fashion market in 2011. The company accounts for more than 4% of the CE market and operates over 300 stores in the region. In four of the six CE countries analysed, the retailer is among the top 3 players in the industry. The leader was followed by Polish LPP group and British grocery retailer Tesco. Top three players captured 12% of the clothing and footwear market value in the CE region.

The growing popularity of the economy range and the rapid development of online sales are among the main trends on the clothing and footwear market in the region.

The budget price bracket prevails on the clothing and footwear market in Central Europe, accounting for 46% of its value. The most substantial proportions are observed in Hungary and Bulgaria, and the lowest figures in Poland and the Czech Republic, where the medium and medium-upper price brackets are more extensive.

The internet remains by far the smallest distribution channel but it is growing very rapidly. Almost half of the money spent on clothes and shoes in Central Europe is taken by specialist retail chains. Independent retailers and open-air markets still account for around one-third of the market value in the region, whereas mixed-range stores, whose influence is highest in the Czech Republic and Slovakia, for over a tenth of that value.

The development of the clothing and footwear retail market is closely related to that of the shopping centre market. In 2011 the lowest GLA figure since 2008, less than one million m2 of new shopping centre stock added, was witnessed in the six CE countries, although this was 7% more than the 2010 figure. The year was particularly difficult for Bulgaria (after a hike in 2010) and the Czech Republic (for the second year in a row), and the most abundant for Romania, which noted an increase in area of almost 15%.

In the first six months of 2012, only eight shopping centres (with fashion retailers) were completed, of a combined 0.3m m2 of GLA. Three times this amount is expected in the second half of the year, and this should enlarge the size of the shopping centre market in Central Europe to almost 16m m2 of GLA this year, 8% more than last year.

Romania and Bulgaria are expected to develop more extensively than other countries in relative terms by 2013, whereas Poland and Romania should achieve the highest figures in terms of nominal value. The outlook for the Slovak market is also promising, and after mid-2012 the Czech market is expected to rebound somewhat. Conversely, because of the “Plaza stop” ban in Hungary, which prohibits the construction of retail structures taking up more than 300 m2, the market will face a shortage of new retail area. In addition, some of the projects in the pipeline are threatened, as the economic conditions in Europe remain uncongenial. 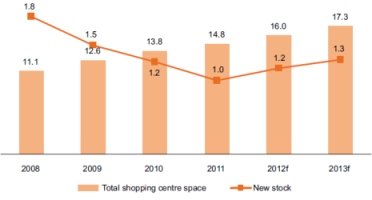 More information can be found in the report “Clothing and Footwear Retail Market in Central Europe 2012” by PMR.