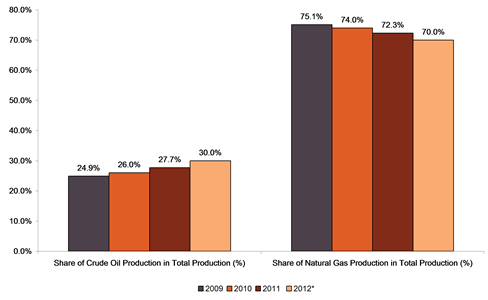 Natural gas prices have been at lower level as compared to crude oil prices since past few years. Moreover, the advent of the shale drilling technologies significantly increased the natural gas supply potential, which further substantiated the bearish outlook in the overall North American natural gas prices. Thus, the operational economics favors crude oil operations over natural gas. In line with the emerging market trends, Forest Oil decided to focus on the development of the oil-rich assets in order to ensure its long-term sustainability. The company plans to focus on increasing the liquid content in its total production in the near future. Forest Oil expects the share of natural gas in its total production to reduce to 70.0% in 2012 compared to 72.3% in 2011.

In order to increase its oil production, the company has increased its exposure to oil-rich acreage between 2009 and 2011. Currently, Forest Oil holds substantial undeveloped acreage, which is prospective for liquids in the Texas Panhandle area, Eagle Ford shale, Wolfcamp oil play and the Wolfberry oil play. The company plans to invest its 2012 capex mainly towards drilling in the liquids-rich areas. Its liquids-rich production is expected to be primarily driven by the Texas Panhandle area in the near future. Forest Oil has allocated 50% of its 2012 E&P capex towards this area. The company’s major liquids-rich targets in this area are located in the Granite Wash play and other oil-rich intervals. It holds around 109,000 acres in the Granite wash play, which is one of the highest acreage in this play. The figure below shows the major companies by acreage in the Granite Wash play.

Forest Oil holds several zones of drilling targets in different intervals in these areas. The company reported 11 intervals to be commercial in the Texas Panhandle area as in February, 2012. Apart from these 11 zones, the company also expected five more intervals to be prospective in this area, which are expected to provide it with additional drilling targets and increase the scope of drilling in the long run. The table below provides the information about the number of drilling locations in its different intervals in the Texas Panhandle area.

Forest Oil has utilized its technical expertise in the Texas Panhandle area to increase its operational efficiency in the area. Currently, the company holds an extensive technical knowledge database of more than 700 wells in the Texas Panhandle area. This data helps in identifying the locations with multi-wells drilling targets in this area. Moreover, Forest Oil holds data for open and cased hole logs, which helps it to determine the pay-off and productivity profile of wells in this area. Furthermore, the company also is working on the vertical and horizontal fracture mapping and reservoir simulation to determine the optimal fracture designs and depletion plans. Thus, Forest Oil’s focus on implementing technical expertise to improve its drilling efficiency and enhanced drilling activities, coupled with its substantial undeveloped liquids-rich resource base in the area is expected to increase the company’s reserves base in the near future. GlobalData expects the production from this play to increase in the future and boost the company’s liquids production, which will support its transition towards a liquids-rich upstream portfolio.

Apart from the Texas Panhandle area, it also holds oil and liquids-rich prospects in the Eagle Ford shale and the Permian basin. Forest Oil’s drilling activities in the Eagle Ford shale are in the initial development phase. Moreover, the company’s drilling activities in the Permian basin are in the initial exploration and evaluation phase. Therefore, the development of these prospects is expected to increase its liquids production in the long run.

More information can be found in the report “Forest Oil Corporation, Company Intelligence Report” by GlobalData.