Changes in Reimbursement Bring Profits for Branded Generics in CIS Markets, According to PMR

Most of the CIS markets do not have modern reimbursement policies, but the countries in question have recently been working in order to improve their drug policies. In Russia the Pharma 2020 plan is being implemented in order to improve the quality and accessibility of locally produced drugs. Ukraine has implemented a pilot programme for reference pricing which is regarded as a major step toward reforming the system. Kazakhstan has also updated its lists of reimbursed drugs. As a result, further growth in the generic drug subgroup is forecast, along with healthy development in the arena of original drugs, with CAGR figures of 15 and 14% respectively between 2012 and 2014 for these groups.

According to the forecasts presented in one of the latest PMR Publications reports, “Generic and Innovative Drugs Market in CIS Countries 2012. Russia, Ukraine and Kazakhstan”, there will be a reduction in the growth of the overall group of generics in the CIS region because of the gradual saturation of the market but it will remain relatively robust – in double figures. Interestingly, in all of the countries there will be an increase in year-on-year growth on the branded generics market but this will not be visible in the overall generics group because of a decline in the rate of growth of unbranded and traditional medicines (these still account for substantial proportions of the generic drug markets in Russia, Ukraine and Kazakhstan). In all, according to the forecasts, the generic drug market (including other drugs not classified as innovative) will be worth €23.024bn in 2014.

The generic drug subgroup is expected to develop at a rate of approximately 20% in Kazakhstan and Ukraine between 2012 and 2014. According to the expectations, this subgroup in Russia will grow by 14% on average per annum. The Russian market is the most heavily saturated in this arena (among the three countries analysed in the report). In Kazakhstan considerable growth is possible because the country is at an early stage of development. In Ukraine and Russia significant changes in reimbursement are planned which will stimulate growth on the generic branded markets in particular.

The innovative medicines subgroup is also expected to grow at a double-figure rate in all the countries with the exception of Ukraine (8%): 15% in Russia and 16% in Kazakhstan, on average per annum. More vibrant growth on the innovative medicine market in the CIS will be impeded because of the lack, for the time being, of appropriate solutions developed by governments to stimulate access to innovation.

The Pharma 2020 programme in Russia might have a positive effect on the market, but this will be in the longer term (after 2014), because innovative projects are at an early stage of development. It is also believed that restrictions in drug advertising recently implemented in Russia and Ukraine will affect the innovative drug and branded generic groups more than any others because these groups are more frequently promoted by pharmaceutical companies – the companies will have to reconsider their marketing strategies. In all, the combined market value of innovative medicines in Russia and Ukraine will reach €9.948bn, with a CAGR of 14% in 2012-2014.

If the CIS region is taken into consideration, Russia accounted for almost 80% in terms of value of the generic drug subgroup in the region in 2011. According to the research, GMP rules which have to be implemented by 2014 will bring a new level of quality to the generic market and will lead to an increase in the proportion of superior branded generics. At the same time, there will be a year-on-year reduction in the share of local cheap unbranded generics – the production of many drugs might come to an end because of the lack of appropriate production standards.

In both subgroups – generic and innovative medicines – there will be an increase in domestically-manufactured medicines on the market, in line with Pharma 2020 programme assumptions. Many global pharmaceutical manufacturers are planning to establish their production facilities in Russia. These include Novartis, AstraZeneca and Novo Nordisk, in the innovative subgroup, and Krka and Teva in the generic subgroup. Russian manufacturers also intend to expand their production facilities in the country. However, domestic production will focus mainly on biosimilars, high-standard generic equivalents of original medicines or the so-called “me-too” projects (the manufacture of drugs which have an original patented formula which is similar in structure to the molecule of the class founder).

Share of Counties Analysed As a Proportion of the Generic Drug Market in CIS (%), By Value, 2011 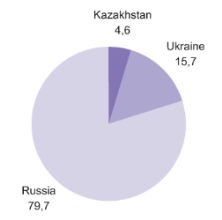 More information can be found in the report “Generic and Innovative Drugs Market in CIS Countries 2012. Russia, Ukraine and Kazakhstan” by PMR.