Cimarex is aggressively focusing on its E&D activities in order to consolidate its reserve and production base. The company evaluates its drilling prospects through a detailed analysis involving potential reserve size, geologic and mechanical risks, expected costs and future production profiles. These exploratory activities of Cimarex are primarily focused in the Permian basin and the Mid-Continent regions. In 2011, the company drilled 54 net wells in the Bone Spring area in the Permian basin region. Furthermore, in 2011, the company participated in more than 330 wells in the Cana-Woodford shale play in the Mid-Continent region. These activities indicate that the company is intensively involved in several exploratory programs in order to strengthen its reserve base. The figure below shows various parameters related to the E&D activities of Cimarex between 2008 and 2011. 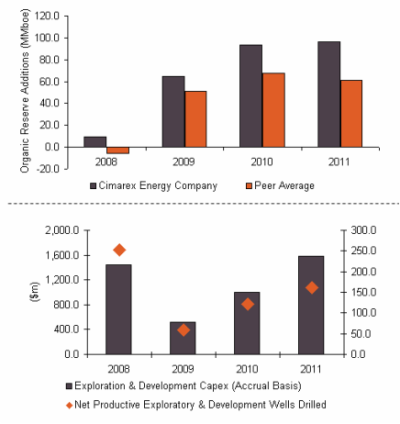 The company’s strategy of consolidating its reserve base through organic reserve additions along with the huge inventory of net undeveloped acreage is expected to provide a strong potential advantage to its reserve base. The increase in the proved reserves of the company will further help it to achieve the targeted production levels between 2012 and 2016.

More information can be found in the report “Cimarex Energy Co., Company Intelligence Report” by GlobalData.