Russia still remains one of the most attractive retail markets. It offers the potential of a population of approximately 143,000,000, and its economy is expected to develop by at least 4% year on year in the medium term. In 2011, there was an increase of almost 16% in retail sales, to around RUB 19.1tr ($651bn). Clothing, footwear and accessories traditionally form the second-largest retail sector after grocery retail. 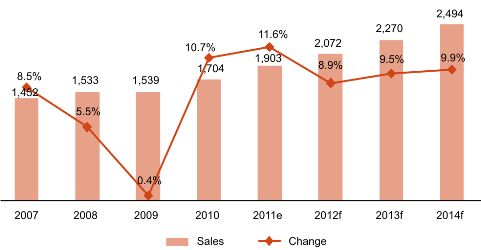 PMR predicts that between 2012 and 2014 the Russian CFA market will grow more slowly than it did in 2011, but still dynamically in comparison with other European countries.

During this period, the average rate will be approximately 9.4%. In addition, all categories of the market are expected to show an increase (although these will vary). Trade in clothing will be driven mainly by children’s wear and a revival in the medium price bracket. Trade in footwear will be significantly affected by price rises (prompted by increases in the cost of raw materials). This could affect demand and channel it further into the low price bracket, although many experts suggest that the medium price bracket will grow more dynamically than any other. The accessories market is far from saturation point; in addition, it represents a range which anyone can afford.

Sportmaster, the owner of the Sportmaster and O’Stin footwear brands, leads the field by some distance on the clothing, footwear and accessories market in Russia. This naturally also makes it the leading sportswear retailer in the country. According to PMR’s estimates, in 2011, the retailer achieved sales revenue of RUB 45.2bn ($1.5bn), a 37% year-on-year increase. The second largest CFA retailer in Russia is Adidas, which is also the second most prominent manufacturer of sportswear in the world. In 2011 it generated sales worth RUB 35.5bn ($1.2bn), according to PMR’s calculations. Adidas operates three brands in Russia: Adidas, Reebok and Rockport. The third largest market player is the Russian concern CentrObuv, with revenue of RUB 27.8bn ($946m). The retailer’s more extensive presence has prompted an increase in sales in excess of 25%. The company opened 265 retail points in 2011, thus increasing its store count to 587 CentrObuv and 143 Centro establishments.

In 2011, the leading 16 retailers in Russia earned revenue of almost RUB 223bn and accounted for about 12% of the country’s total CFA retail sales, whereas the three largest players controlled approximately 2.5% of the market. These figures prove that the Russian fashion industry is highly fragmented. In general, there are a number of chains, both national and foreign, on the Russian CFA market. The exception is footwear, which is dominated by Russian companies. Ecco is one the few foreign companies operating in this market sector.

More information can be found in the report “Clothing and Footwear Retail Market in Russia 2012” by PMR.