Romanian civil engineering construction has registered considerably better performance in 2011 compared to the residential and non-residential segments, which posted decreases. The reason behind this is increased capital expenditure on infrastructure projects, particularly road and railway construction.

Despite the strong economic downturn Romania experienced in 2009 and 2010, the value of civil engineering works has not decreased greatly, compared to the decreases in non-residential and residential construction. According to PMR’s latest report, entitled “Construction Sector in Romania 2012”, civil engineering increased by nearly 16% in 2011, reaching RON 35bn (€8.3bn). 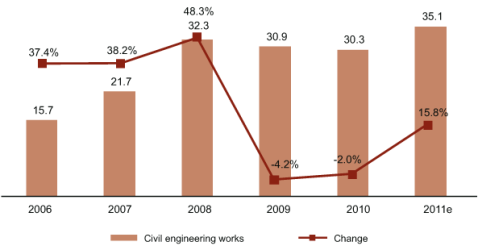 Road construction is the leading segment of the engineering market. Romania invested considerably in the rehabilitation of existing roads and the construction of motorways in the first two years of EU accession, before pausing the following two years, faced by an uncertain economic situation. Apart from small decreases in 2009 and 2010, construction output of roads has increased consistently over the past decade, reaching an estimated RON 18.7bn (€4.4bn) in 2011, a value almost nine times that of 2002 and more than one-fifth more than in 2010. PMR analysts expect this rising trend to continue for at least 2-3 years, until 2015.

As an EU member, Romania is entitled to large amounts of cohesion funds that will be spent primarily on infrastructure, with road and railroad infrastructure accounting for the majority of investments. Within the Cohesion Fund scheme, Romania may obtain funds of up to €4.6bn to be spent on transport infrastructure from 2007 to 2013.

However, among the obstacles that motorway construction projects experienced were the unfavourable legislative framework which made both land expropriations and relationships with contractors very difficult tasks. A change in the legislation in 2009 has brought several improvements, with expropriation in particular becoming simpler and faster.

Another problem beginning to disappear with increasing competition is contractors offering very low bids to win contracts and then demonstrating that the sum is unrealistic in order to demand fund increases. To deal with or discourage such behaviour from other contractors, the Ministry of Transportation invoked contracted clauses which stipulate penalties or contract terminations for not meeting deadlines or attempting to change contract terms.

Although no motorway sections were actually finalised in 2011, the past year has brought Romania much closer to consistent completions which will take place over the following couple of years. As of the end of 2011, 434 km of motorway, totalling €4.1bn, were under construction. In 2012 about 200 km of this will be completed, mostly segments on which work began 2-3 years ago. Additionally, contractors for a further 111 km will be selected in 2012, for which the necessary financing totalling €1.1bn has already been secured.

It is very likely that road and railway construction, which account for the largest share of civil engineering construction output, will continue its growth after 2012. Many of the initiated projects are due for completion in 2013-2014 and with the new regulations construction consortia are expected to abide by the imposed completion dates.

More information can be found in the report “Construction Sector in Romania 2012” by PMR.