Israel is defined as the second largest bromine manufacturer around the globe and the key one in the Middle East. The country’s output amounted to 200,000 tonnes in 2011, thus indicating a rise by 15,000 tonnes, or 8.1%, year on year.

The country sells certain amount of the material to overseas users. Its yearly bromine exports were evaluated at USD 77 million in 2010, up by USD 21 million, or 37.5%, from a year earlier.

The country’s demand for bromine does not surpass its capacity. The consumption level rested at about 65,000 tonnes in 2011, opposing to 75,000 tonnes a year earlier.

Jordan’s bromine exports were about 10,000 tonnes in 2011, demonstrating a twofold increase from 2010. Imports volumes of the country are tiny.

Largest bromine reserves are situated in the USA. The country produces world largest volumes of the material on an annual basis. 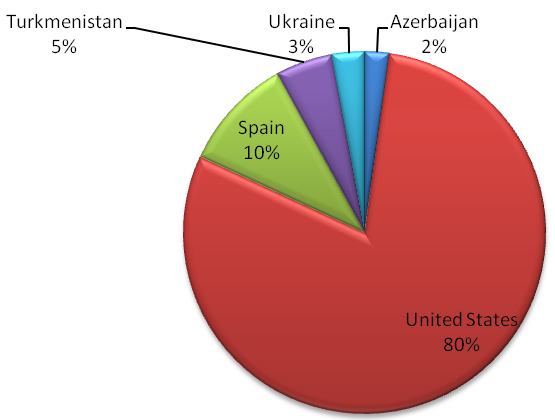 The demand is expected to grow, as well. This will push bromine prices upward. The latter ones may go up by USD 200 per tonne from 2012 through 2016 in the US market.

More information on the bromine market can be found in the report "Bromine Market Review".