2012 is a Challenging Year for Czech Construction Industry, Finds PMR

LONDON – The revised Czech government strategy on transport infrastructure construction released in January 2012 indicates that the decline in civil engineering construction may continue in 2012 due to the postponing or freezing of major constructions in the road and rail sector. A return to growth is expected in 2013-2014.

In 2011 the Czech government struggled with a shrinking budget and as a result cut a series of investments involving civil engineering constructions. Transport infrastructure construction suffered particularly in 2011 and will continue to slumber in 2012. A return to growth is expected in 2013-2014 and will be generated mostly by projects that were frozen or delayed indefinitely in 2010-2011.

Structure of civil engineering construction output in the Czech Republic, by category, 2010 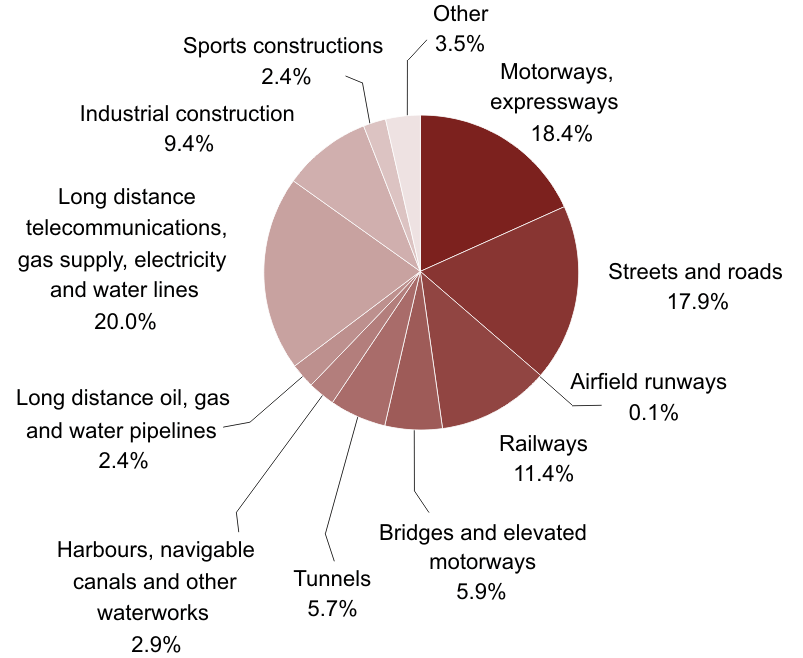 Railway construction has also been badly hit by the economic crisis. In fact, in recent years it has been the civil engineering sector that has suffered the most from the budgetary cuts. Railway construction in the Czech Republic is expected to see a similarly slow development in 2012. The government’s revised strategy on transport infrastructure construction to 2020 foresees only three major railway reconstruction works being completed in 2012 and no firm plans for the years to come. All these three constructions had been started in previous years. There are no concrete plans at the moment to invest in fast-speed railway lines in the country.

After a few years of decline non-residential construction is expected to grow slightly in 2012 and will counterbalance the situation in the engineering sector. The surging demand for office and logistics space is expected to drive non-residential construction in 2012 and subsequent years. Also, the retail sector continues to develop, though at a much lower pace.

More information can be found in the report “Construction sector in the Czech Republic 2012” by PMR.