Two Asian countries, China and India were recognized as cement industry leaders in 2011. The USA, Turkey and Brazil also produced significant portion of the material available in the world market.

Structure of cement production, by country, 2011 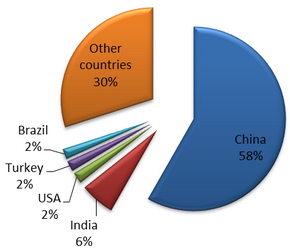 The demand for the material also registered a boost in the country. The consumption grew by 120 million tonnes, or 6.4%, year on year in 2011. It was assessed at around 1.87 billion.

China exports certain volumes of the material on an annual basis despite the traditionally high demand from domestic users. Cement exports of the country were evaluated at around 16.1 million tonnes in 2010, opposing to 15.6 million tonnes a year earlier. Most cement cargoes were delivered to Angola and Bangladesh.

Overseas manufacturers also participate in the Chinese market activity. Local purchasers obtained 1.8 million tonnes from them in 2010, twofold up compared to 2009.

Global prices for cement have been on a downtrend during at least last five years. For instance, the year average price was 1.1% lower in 2011 than a year earlier. Besides, it showed a decrease by 10.4%, in comparison with 2006.

The world cement output surpassed 3.38 billion tonnes on 2011, demonstrating only a slight upsurge by 90 million tonnes, or 2.71%, year on year. Nevertheless, the figure was considerably higher than the one in 2006 when global cement manufacturers generated roughly 2.61 billion tonnes in total.

However, the growth rate will be primarily dependent on both micro- and macroeconomic situation.

More information on the Cement market can be found in the report Cement Market Review.