The world cadmium mine production exceeded 22,000 metric tons in 2011. Nevertheless, the figure was approximately 800 metric tons or 4.7 percent lower than in 2010.

The material is primarily applied in the production of Ni-Cd batteries which, in their turn, are used in consumer electronic devices. Asia is a key market for such batteries.

The global demand for Ni-Cd batteries trended lower during last few years as batteries of new types appeared in the market. This to a certain extent affected the upstream market. However, some Ni-Cd batteries market participants expect a consumption boost from the industrial sector in the near future.

China is the most prominent manufacturer of cadmium. The country produced around one third of the material available in the global market in 2011.

Prices for cadmium initiated to move down in the China domestic market in the previous year. One tonne of cadmium ingots 99,99% was assessed at below USD 2,900 in early March 2012, down by about USD 2,600 per tonne year on year. The price decrease was partially attributed to the demand drop.

The country’s cadmium prices started to improve in the second half of March following values uptrend in Europe. The Europe prices rise was driven by lower operating rates of local manufacturers due to the environmental policies strengthening in the region.

Meantime, a South Korea-based firm has recently disclosed a decision to enhance its cadmium output by 1,800 tonnes per year in the nearest future. As a result, its capacity will reach 5,000 tonnes per year.

Global reserves of cadmium are estimated at slightly above 630,000 metric tons. Largest deposits are located in China, India and Australia. They almost reach 285,000 metric tons in total. 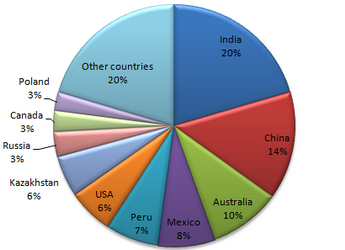 More information on the Cadmium market can be found in the report Cadmium Market Review.