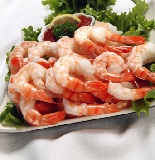 LONDON - Minh Phu has plans on steady increase of its capacity both in fishing and processing of shrimp; however, the company might have even more room for expansion. Many experts share the opinion that the seafood demand will be very high in 2012, while the supply will undergo a noticeable shortage. Therefore, Vietnam's plan to increase the seafood revenue to USD 6.5 billion from USD 6 billion in 2011 is within reach. And this 0.5 billion is to be produced by someone. Minh Phu is the largest Vietnam shrimp exporter, so it has all the resources to contribute to domestic shrimp exports growth.

Up to 2015, seafood consumption per capita is expected to grow by 0.8% annually, while total seafood consumption is about to add 2.1% each year. However, natural disasters and seafood epidemics in Southeast Asia throw the supply back in numbers, causing shortage. The best solution in the situation is aquaculture.

Vietnam Association of Seafood Exporters and Producers (VASEP) states that 50% of total seafood consumption will be satisfied with aquaculture products in 2012. That’s where Minh Phu has an opportunity to increase its market share. The company has plans on constructing an aquaculture farm in Vietnam; however, Minh Phu might need more capacities due to the following reasons:

Founded in 1992 and headquartered in Camau City (Vientam), Minh Phu Seafood Corp. engages in fishing, value-added processing and exports of shrimps worldwide. It is one of the top five shrimp exporting companies in the world. Company’s main market is USA, followed by Japan, EU, South Korea and Canada. Since 2006 the enterprise trades at Vietnam stock exchange under the ticker MPC.