London, November 30th, 2011 – Spanish military expenditure grew at a CAGR of 3.07% during the review period. However, due to financial constraints caused by the global economic crisis, the nation’s military expenditure is expected to register a more moderate CAGR of 2.81% during the forecast period. Despite cuts to the Spanish defence budget, Spanish defence expenditure is expected to be supported by security threats, international missions and the country’s strained relationship with Morocco during the forecast period. 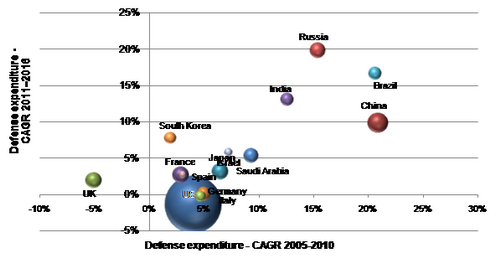 During the review period, Spain allocated an average 0.8% of its GDP towards defence expenditure. However, during the forecast period this is anticipated to decline to an average 0.65% of its GDP, to reduce the overall budget deficit of the country

As a result of the security threats faced by the nation from internal and external terrorist organizations, the Spanish homeland security budget is expected to grow at a CAGR of 2.22% to 2016. This reflects the increase in the threat posed by terrorist organizations such as Euzkadi Ta Askatasuna (ETA) and Al Qaeda, maritime security threats, and the rise in the illicit drug trade.

To enhance the capabilities of its domestic defense sector, the Spanish government has made offsets mandatory for all defense procurements exceeding US$1.3 million. The main objective of the offset program is to build domestic defense capabilities to increase overall arms exports. According to the country’s offset policy, investors are obligated to invest 100% of the contract value into the nation’s economy.

To build a military sector capable of competing with major arms supplying nations such as the UK, the US, Germany and France, the Spanish government encourages domestic defence firms to form partnerships with a foreign defence companies. In addition, many companies enter the Spanish market by collaborating on research and development projects.

More information can be found in the report “The Spanish Defense Industry Market Opportunities and Entry Strategies, Analyses and Forecasts to 2016” by iCD Research.