Cimzia is a humanised antibody fragment linked to ethylene glycol in order to extend its plasma half-life to that of the whole antibody. Certolizumab pegol has anti-TNF-alpha action, and is indicated for the treatment of Crohn's disease and rheumatoid arthritis. Cimzia is formulated for administration by subcutaneous self-injection using a prefilled syringe.

Celltech (acquired by UCB in 2004) developed Cimzia. UCB first launched Cimzia for Crohn's disease in Switzerland in January 2008. The US FDA approved Cimzia for this indication in April 2008; UCB then launched the product in the US. However, European regulatory authorities rejected the drug in November 2007 for Crohn's disease, citing lack of lack of evidence of efficacy and general safety concerns. UCB appealed the decision, but the negative decision was confirmed in March 2008.

Regulatory approvals for rheumatoid arthritis followed in 2009. In May 2009, the US FDA approved Cimzia for the treatment of adult patients with moderately-to-severely active rheumatoid arthritis. In June 2009, the European Committee for Medicinal Products for Human Use (CHMP) recommended granting marketing authorisation for Cimzia for rheumatoid arthritis in combination with methotrexate in adults, when the response to other agents has been inadequate. In these patients, Cimzia can be given as monotherapy in case of intolerance. In the US, Cimzia is now approved for the following uses:

After Cimzia's launch for Crohn's disease in Switzerland in January 2008 and in the US in April 2008, the drug generated total sales of $14m in 2008. In Japan, UCB and Otsuka have signed a co-development and co-marketing agreement for the drug.

Cimzia will achieve strong growth in the years between 2010 and 2015. Cimzia revenue grew by 163% in 2010, with sales worth $0.30bn. Cimzia will show an impressive CAGR of 31.8% to 2015, reaching revenues worth $1.19bn that year. By 2021, Cimzia revenue will reach $1.68bn, representing a CAGR of 17% for the entire forecast period. Cimzia will reach blockbuster revenues from 2014 onwards. Because it is available as a prefilled syringe for subcutaneous injection, patients can self-administer. This allows Cimzia to compete with Humira in terms of convenience. Cimzia's main selling point is that it is not a full monoclonal antibody. Instead, it is a PEGylated fragment. PEGylation is the attachment of a polyethylene glycol moiety to a drug molecule. PEGylating a drug has several advantages: it increases the drugs solubility. It also increases the amount of time a drug is in circulation by preventing enzymatic degradation, meaning dosage frequency can be reduced. Attaching PEG also reduces the chances of antibodies being formed to the drug. Thus, PEGylation allows Cimzia to keep its activity but reduce its immunogenicity, reducing the chance of allergic reactions or non-response. 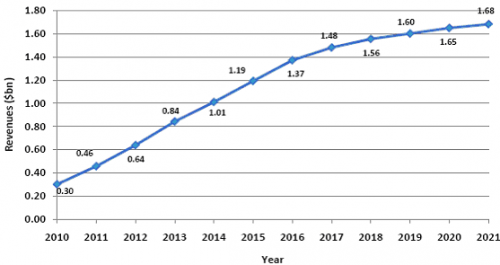 More information can be found in the report “Therapeutic Monoclonal Antibodies: World Market 2011-2021” by Visiongain.