Private Healthcare Market in Poland: over PLN 34bn in 2013

According to the latest report published by the research and consulting company PMR, entitled “Private Healthcare Market in Poland 2011, Development Forecasts for 2011-2013”, the value of the private healthcare segment increased by about 4% year-on-year in 2010, to PLN 28.8bn (€7.2bn). The private healthcare market is expected to be worth PLN 34.4bn (€8.6bn) in 2013. This figure includes payments for medicines and medical equipment, rehabilitation services, diagnostic tests and visits to doctors paid out of patients’ pockets, informal payments, subscriptions offered by medical companies, private health insurance sold by insurance companies and other charges covered directly by patients.

Market to grow 6% on average

Adverse developments arising from the economic crisis led to a slowdown affecting all segments of the private healthcare market in 2010 compared to 2009. But it should be noted that growth remained positive across all the segments. “The fastest growth, in the double-digit range, was shown by the segment of medical subscriptions and health insurance, while the segment of payments for medicines and medical equipment rose at the slowest rate” says Agnieszka Skonieczna, PMR Pharmaceutical Market Analyst and the report co-author.

The private healthcare market in Poland is expected to increase at the average annual rate of around 6% in 2011-2013, to exceed PLN 34bn (€8.6bn) at the end of this period. In the analysed period the growth rate for the medical subscription and health insurance segment will be in the double-digit range, while other segments will continue to expand at rates of up to 10%. 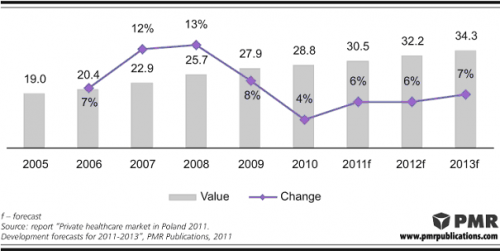 In March 2011 the Ministry of Health (MoH) presented the bill on supplementary health insurance in an attempt to regulate the market of private health insurance. However, contrary to expectations, solutions presented in the bill will not be helpful in reforming the healthcare system in Poland effectively and they are unlikely to be a stimulus supporting more dynamic growth of additional health insurance. It will be so as the key objective of the law is, first and foremost, safeguarding the rights of patients using medical services under the public healthcare system and, only then, creating a legal framework for the operation of supplementary health insurance instruments.

The bill was met with criticism from virtually all sides. Representatives of private medical companies considered the provisions stipulating that a tax break would be available only with respect to supplementary health insurance that will be also optionally financed from the Company Social Benefits Fund (ZFSS) as discriminating. The bill was also negatively evaluated by representatives of the Polish Chamber of Insurance (PIU), the Employers of Poland (PRP), the Supreme Medical Council (NRL) and the Doctors’ Trade Union of Poland (OZZL).

The key assumption of the bill drafted by the MoH, i.e. the introduction of tax breaks available to people purchasing supplementary health insurance, will not be put into practice in the next years as the Ministry of Finance (MoF) raised objections. The MoF argues that, at the moment, Poland is in excessive deficit procedure and cannot implement new tax exemptions or breaks that would reduce revenues to the budget. Tax breaks, if any, could be introduced only in 2013.

The MoH also abandoned, for the time being, changes which private insurers eagerly hoped for and which were first presented in the bill of July 2008. At that time, the MoH had planned to decentralise and demonopolise NFZ and allow private insurers to compete against NFZ on equal terms from 2012. Even in 2010 the MoH vowed that pilot programmes testing the new solution would be launched in two voivodships still in 2011.

The Law on Healthcare Activities came into force on 1 July 2011, whereby policies applicable to the transformation of hospitals into companies under the commercial law were amended. These provisions are not mandatory anymore, yet local governments which do not transform hospitals will be required to cover a loss, if any, resulting from their operations within three months of the approval of financial statements. In the event of failure to comply with this obligation, a given hospital will be required to change its organisational and legal status (transform into an incorporated company or a publicly-financed entity) within 12 months or it will have to close down. According to the MoH’s estimates, up to 40% of hospitals which currently operate as independent public healthcare facilities (SP ZOZ) will be transformed into companies under the commercial law by 2013. According to MoH data, 114 hospitals and 55 hospital wards were subject to transformation in 2000-2010.

Transformation of hospitals in accordance with the Law on Healthcare Activities will be an easier process when compared to transformation executed under the so-called Plan B. For instance, there will be no need to conduct a number of concurrent processes and the new facility will be a legal successor of SP ZOZ, inheriting both its rights and obligations. Motions for debt cancellation under Plan B must be filed by August 2011.

More information can be found in the report “Private Healthcare Market in Poland 2011, Development Forecasts for 2011-2013” by PMR.