Clothing and Footwear Retail Market in Poland Rose by 4.6% in 2010 – Favourable Prospects for Next Years

The level of economic growth in 2010 was higher than one year earlier and this situation positively influenced growth on the clothing and footwear retail market in Poland. Despite the still sensed climate of the crisis and difficult period for the country, the clothing and footwear industry noted an increase in sales, compared with a small decline observed in the previous year.

According to estimates presented in the latest PMR report, “Clothing and Footwear Retail Market in Poland 2011”, the growth in clothing and footwear sales in 2010 was higher than the year before and stood at 4.6%. PMR forecasts for this and the following years continued moderate growth at 5.8% in 2011 and 6.3% in 2012. As the macroeconomic data improve, so will consumer moods, which should be reflected in increased purchases of clothing and footwear. The good trend observed in H1 2011 should also be sustained in H2, which is in principle usually better for the footwear and clothing industry. A general economic stabilisation and improved financial standing of Poles are expected in 2012. 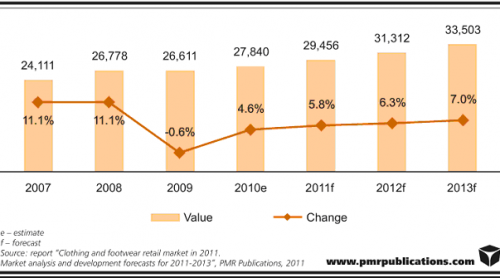 The barriers in development of the clothing and footwear retail market in Poland related to limited purchasing power of Polish consumers, strong competition on the market, and also high maintenance and production are still noticeable. Therefore, the forecasted growth in the next years will be rather moderate but stable.

In the survey conducted by PMR Research for the purposes of the report, respondents also indicated other factors that may have a negative impact on the market:

Barriers to growth recognised in clothing and footwear compahies in Poland, May 2011.

Other interesting answers provided by the respondents, which were not included in the above chart, are the following:

According to PMR estimates, sales of clothing represents 77% of the total value of the clothing and footwear market in Poland. In 2010, the worth of the clothing segment topped PLN 21.4bn (€5.4bn), while the footwear sector was valued at nearly PLN 6.5bn (€1.6bn).

Sales of clothing are characterised by stronger growth compared to the footwear market. In the case of clothing, which requires a lower one-off financial expenditure, purchases occur more frequently, leading to greater sales value. Footwear is purchased significantly less often than clothing, usually only several times a year, mainly as a result of the wear and tear of a previous pair of shoes and the need to purchase a new one, and not due to changes in fashion trends.

In 2010, the clothing market grew by 5%, while footwear sales expanded by 3.4%. PMR forecasts higher growth rate for clothing sales as compared with footwear sales in the coming years.

In accordance with the survey referred to above, the segment of everyday mid-range clothing will have a chance for development. This type of clothing is bought most frequently, wears out the fastest, is most easily available, and has the largest group of customers.

Sales of the cheapest, discount clothing also have good prospects. The increasing costs of living make people want to save money and more frequently buy cheap clothing or wait with their purchases for sales.

The segment of sports clothes also has a high development potential. Practising sports and healthy lifestyle are becoming more popular in the Polish society. The awareness of Poles is also changing, and they more frequently wish to buy specialist sports clothing.

The increased number of births, commonly known as a “baby boom” is also of importance. Although it does not compare with the one from the beginning of the 1980s, this can have a significant impact on the dynamic development of the children clothing segment. On the other hand, this type of clothing must be always bought, regardless of the price, and its selection is still slim.

Segments of the clothing market in Poland with the most positive outlook for growth, May 2011.

More information can be found in the report “Clothing and Footwear Retail Market in Poland 2011 ” by PMR.