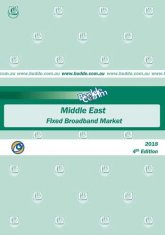 The deployment of fibre-based broadband infrastructure has attracted increased interest in many markets of the Middle East due to the rising demands on data from consumers and enterprises alike. Many countries are also recognizing that high-speed fixed broadband infrastructure will be required to underpin the current 5G evolution and provide the backbone for smart cities overall.

This increased interest in fibre-based broadband is also leading to innovation and new initiatives in some markets of the Middle East. In Lebanon, for example, the incumbent, Ogero, became one of the first in the world during 2019 to conduct a commercial trial of a fixed network slicing solution deployed to its FttH network.

Competition in the wholesale broadband market is improving in some markets as well and infrastructure sharing initiatives are being implemented. Licenses were recently awarded in Lebanon, for example, which allows alternative service providers to operate and supply FttH services to consumers, using Ogero’s government-owned network.

Overall, fixed broadband in the Middle East is becoming a more dynamic and progressive sector with countries like the UAE, Saudi Arabia and Qatar leading the way - and other countries like Iran and Turkey offering potential growth opportunities.

Recent developments:Companies mentioned in this report include:

1.1 FttH is growing in the Middle East