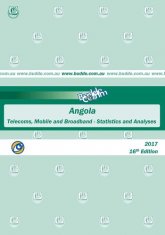 The Angola - Telecoms, Mobile and Broadband - Statistics and Analyses report includes all BuddeComm research data and analysis on this country. Covering trends and developments in telecommunications, mobile, internet, broadband, infrastructure and regulation.

Angola’s telecom sector has showed consistent recovery following the end of a decades-long civil war in 2002. Political stability has encouraged foreign investment while the government and regulator have started the process of opening up the telecom sector to new competitors.

The mobile market remained a duopoly between Unitel and Movicel for many years: although Angola Telecom had a share in the market it did not launch LTE services until mid-2018, while service expansion has been timed with plans to privatise the operator. Nevertheless, there has been slow progress in LTE network development, with only a small proportion of the country covered by network infrastructure. Much of the investment from telcos is still geared to 3G, given that the majority of data users remain on this platform.

A new unified licensing regime introduced in late 2017 has allowed for two additional licensees to operators across all sectors. One of these licenses was awarded in July 2020, to Africell.

The government has aimed to develop telecom infrastructure in a bid to diversify the country’s economy and lessen its dependence on offshore crude oil production, which accounts for almost all exports and up to 80% of tax revenue. By extending and upgrading telecom networks the government expects businesses to become more efficient and for e-commerce to become a more prominent feature of economic growth. In addition, networks will facilitate rural access to education and health care. However, there is much progress to be made if the country is to improve the business climate and attract investors.

Competition has been introduced in the underdeveloped fixed-line market but launch delays and consolidation among the newly licensed players have led to a duopoly in this sector as well, between Angola Telecom and Mercury Telecom. After three years of loss-making operations, Telecom Namibia pulled out of its investment in fixed-wireless operator Mundo Startel, citing regulatory obstacles.

3 COVID-19 AND ITS IMPACT ON THE TELECOM SECTOR