London – “The global hormonal contraceptive market is a fast growing market, with oral contraceptives considered to be the most common method of avoiding unplanned pregnancies by women. In 2009, the global contraceptives market was $11.2 billion and is forecast to grow to $14.5 billion by 2016, which represents a growth rate of 4% between 2009 and 2016.”

According to the report by the Guttmacher Institute, the number of women who are in need of public funded contraceptives, increased by one million between 2001 and 2004, and increasing at an ever faster rate. An increase in the number of women requiring public funded contraception shows an increasing awareness among women of contraceptive methods. This increasing awareness will accelerate growth in the contraceptive market in the coming years. As a result, the market will continue to be fast growing, thereby attracting the attentions of the major pharmaceutical companies.

The contraceptives market has a strong pipeline base supporting growth in the market, and thereby attracting many pharmaceutical and biotechnological companies. Major pharmaceutical companies such as Teva, Watson, Bayer and Merck have active contraceptive pipelines. One of the major activities in the market at present is the development of generic versions of off patent drugs. The entry of these generic versions will boost the oral contraceptive market and thereby bring about further rises in the hormonal contraceptives market in the coming years. Also, the launch of blockbuster drug Beyaz in 2010, by Bayer, will help offset the decline in revenues due to patent expiries. The rapid entry of new players is set to intensify competition in this market. Also, the presence of a highly active pipeline is an indicator of strong market competition in the future. 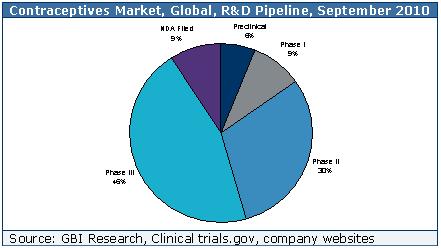 The Contraceptives Market is Concentrated, with the Top Three Companies Having Significant Market Shares

The global contraceptives market is dominated by three major pharmaceutical companies that account for a significant percent of the market. The top company is Bayer, followed by Johnson & Johnson and then Warner Chilcott. Although three top companies dominate the market, there are also a number of small pharmaceutical companies in the market, making it a strong market in terms of competition. However, the development of blockbuster drugs has made these three companies the dominant players in the market. Bayer markets Yaz and Yasmin, and has total revenues of $1.2 billion; Johnson & Johnson, though their subsidiary Ortho Mc-Neil, markets Ortho tri cyclen; and Warner Chilcott, has Loestrin 24 Fe and has total revenues of $247.6m in the oral contraceptive market. 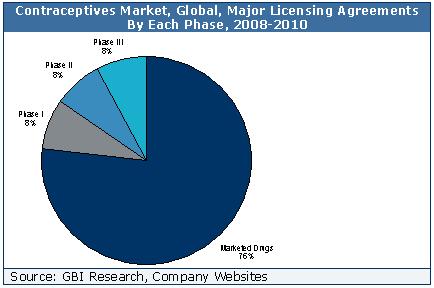