In 2014 sales of dermocosmetics at pharmacies in Poland will be worth almost PLN 1bn (€245m), according to the latest report “Dermocosmetics Market In Poland 2012” by PMR. We estimate that in 2012, in the wake of an increase in sales at the end of the year, they could be worth as much as PLN 895m.

Difficulties on the pharmacy market in 2012

In 2010-2011 the economic crisis had a particularly adverse effect on the market covered by our analysis. According to industry representatives, asked specifically for the purposes of this report, the market is experiencing gradual saturation – a wide range of products is duplicating formulas already existing on the market. Furthermore, the complicated legislative procedure (in comparison with those of other countries, rather than other kinds of products, e.g., drugs) does not make life for manufacturers and distributors easier. What is meant here is mainly the contradictory decisions issued by different institutions. Products available on foreign markets, in Scandinavia for example, can, as a result, be held up at the registration stage in Poland.

“In 2012 market growth was adversely affected by the provisions of the new Reimbursement Act, discussed at the beginning of this section. After 1 January 2012 the most significant change for the market subgroup in question was the ban on pharmacy advertising. As a result, at the beginning of the year some marketing tools such as promotional magazines and the offer of dermatological consultations disappeared from pharmacies. In addition, in the wake of the turmoil on the pharmacy market and a reduction in revenue from reimbursed drugs, many pharmacies are in a poor financial situation: for example, some have declared themselves bankrupt or refrained from implementing expansion plans. At present Poles are also spending more on drugs, reducing the amounts spent on dermocosmetics or choosing cheaper brands.” Monika Stefanczyk, Head Pharmaceutical Market Analyst at PMR, explained.

In summary, PMR estimates that for 2012 as a whole the growth rate will be negative, with a figure of approximately 2%, given an increase in dermocosmetics sales at the end of the year caused, in part, by Christmas gift purchases. In subsequent years, the market will possibly adapt to the new legal situation, and more pharmacy owners may be interested in adding dermocosmetics to their product portfolios. The margins of these products could be 20-30%, and this could mitigate the negative effects of the Reimbursement Act. This optimistic approach might have been confirmed by the launch of new brands and products even in 2012, which was a difficult year.

At the same time, the legislative chaos and lack of suitable support for pharmacy sales (in comparison with that described before) has caused manufacturers to prefer the online and beauty supply distribution channels. The vast majority of our respondents believe that there will be an increase in the value of the online dermocosmetics distribution market in Poland in 2012 and 2013.

Respondents' Forecasts for the Development of Online Dermocosmetics Sales in 2012-2013 in Poland (%), October 2012 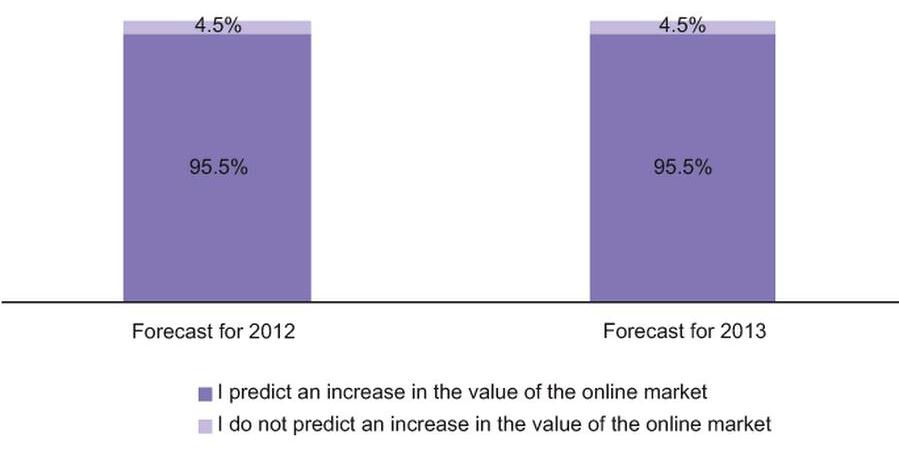 Given the results of our survey, PMR forecasts that there will be a year-on-year increase of between 10% and 20% in online sales over the next few years, i.e. about 2.5 times the figure for sales at conventional pharmacies.

More information can be found in the report “Dermocosmetics Market In Poland 2012” by PMR.