The majority of the CIS member states have overcome the consequences of the 2011 global economic crisis. GDP of every member state rose last year. Overall, compared to 2010, construction sector output grew in 2011. The government’s role in the construction sector has increased significantly. To stimulate employment growth and higher spending CIS governments initiated large-scale infrastructure projects, which also benefitted construction output.

In 2011 demand for cement increased significantly in almost every CIS member state and production quickly responded to increasing consumption. According to PMR’s latest report entitled “Cement Market in CIS Countries 2012”, the 12 countries covered in the report produced a combined 93.5 million tonnes of cement in 2011. Nearly 60% of total output was produced in Russia, while Ukraine and Kazakhstan produced 11% and 8% of total CIS output, respectively. The remaining 9 countries produced only 22% of total cement output.

Cement Production in the CIS Region, by Country, 2011 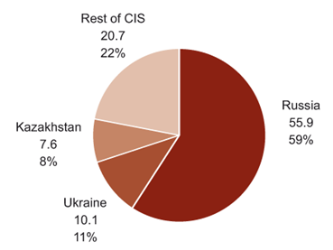 At the same time cement consumption in the region reached 98.5 million, more than 5% higher than local production. The top three producers of cement consumed more cement than they produced in 2011. The balance is also negative for the remaining countries if taken as a whole, although within those countries some produce more than they consume.

Cement Consumption in the CIS Region, by Country, 2011 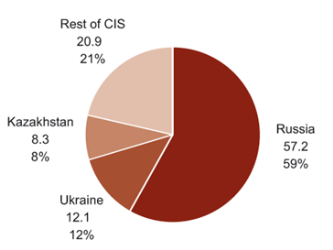 Given the positive economic outlook for most of the countries, it is expected that production will grow in 2012 by approx. 14% to nearly 106 million tonnes. At the same time these states’ total consumption is expected to reach nearly 109 million tonnes. The gap between cement consumption and production in the CIS region is largely filled by imports from three countries: China, Turkey and Iran.

A very small amount of cement is exported by these 12 countries outside the CIS. In terms of external trade, significant changes are not expected. Starting from 2012, Russia, Belarus and Kazakhstan launched a common economic area, which enables these countries to trade internally without customs tariffs. This suggests that internal cement trade between these countries is expected to increase. Another important factor that might influence the volume of the cement trade and stimulate international competition is Russia’s accession to the World Trade Organization.

Although large international cement producers such as HeidelbergCement, Lafarge and Holcim have a strong presence across the CIS region, in most of the countries local and CIS-originated cement producer companies and groups still dominate the market.

More information can be found in the report “Cement Market in CIS Countries 2012” by PMR.