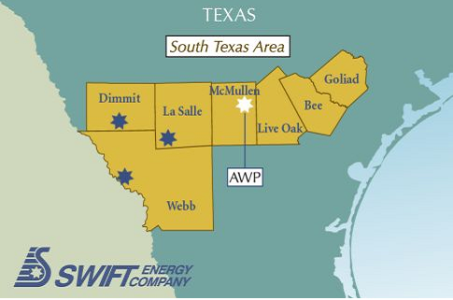 Swift’s Eagle Ford shale in the South Texas region is one of the significant drivers for the company’s future production. The company entered into this shale through a 50:50 Joint Venture (JV) agreement with Petrohawk Energy Corporation (Petrohawk) during 2009. Swift’s JV with Petrohawk covers around 26,000 acres in the McMullen County, South Texas. The venture drilled their first well in this shale in Q4, 2009 with Petrohawk as an operator.

After establishing this JV, Swift has been continuously increasing its acreage in the Eagle Ford shale. The company held around 79,308 acres in this shale at the end of 2011, of which 62,862 acres were undeveloped. It held a net proved reserves base of 68.7 MMboe in the Eagle Ford shale as of December 31, 2011, of which around 82.1% reserve base was undeveloped. Thus, Swift holds significant undeveloped reserve base in this shale to support its development activities. In order to develop the Eagle Ford shale reserves, the company enhanced its drilling activities and drilled 26 wells in this shale in 2011 compared to 22 wells drilled in 2010. Swift drilled six non-operated wells each in 2010 and 2011, in the joint venture acreage, which was operated by Petrohawk, and the rest 36 wells were all its operated wells in these years.

The new report "Swift Energy Company, Company Intelligence Report" by GlobalData states that with its long-term focus to develop this shale, Swift plans to drill 31 wells in the Eagle Ford shale during 2012. Majority of the company’s future drilling in this shale is expected to mainly target the liquids rich phase in the AWP field and in the Artesia Wells area. Swift’s enhanced drilling activities in the Eagle Ford shale grew its drilling inventory from 57 proved undeveloped locations in 2010 to around 1,000 drilling locations in this shale, based on 80 acres spacing at the end of 2011. Moreover, it expects estimated ultimate recovery (EUR)/ well of around 7-10bcfe in dry gas phase and EUR/ well of 395-1,100 Mboe in liquids-rich phase of the Eagle Ford shale. Swift estimates net total resource potential of more than one billion barrels of oil equivalent (Bboe) in this shale. The company’s average drilling and completion cost per well in the Eagle ford shale is in the range of $8.5-9.5m, based on a lateral length of 6,000 feet. The table below shows the economics of Swift’s wells drilled in various phases in the Eagle Ford shale.

Swift’s total reserves in the Olmos Tight Sands formation were 61% natural gas and 49% crude oil and liquids in 2011. The company expects EUR/ well of around 995 Mboe from its wells drilled in the natural gas rich targets containing associated condensate. It expects EUR/ well of 1,095 Mboe, including 4.7bcf of natural gas and 320 Mbbl of NGLs in its rich gas targets in this formation. Swift expects a net total resource potential of 1.2-1.8 trillion cubic feet equivalent (tcfe) in its Olmos Tight Sands formation. The table below shows the economics of the company’s wells drilled in this formation.

Thus, Swift’s focus on the development and redevelopment activities in the Eagle Ford shale and the Olmos Tight Sands formation is expected to increase its resource base. This will eventually grow the company's production levels from the South Texas region in the long run. This region is expected to contribute the highest production towards its total production among all the regions in the future.

More information can be found in the report “Swift Energy Company, Company Intelligence Report” by GlobalData.