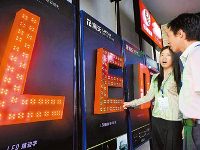 LONDON – The year 2010 was the springtime for LED industry, but 2011 was the wintertime. For most manufacturers, the cold winter may last until 2013 or 2014. The LED price declined substantially in 2011. On the one hand, the capacity expansion of manufacturers led to the market oversupply. On the other hand, the shrinking shipment of LED-TV in Q2 2011 and the adoption of LED chip with higher brightness reduced LED consumption. The enterprises in Taiwan and South Korea were hardest hit by the declining price.

Though there are a number of LED enterprises in Chinese Mainland, they do not pose any pressure on foreign companies for the time being. China’s largest LED enterprise, Sanan Optoelectronics derived USD180 million from LED chips in 2011, ranking No. 19 worldwide.

New "Global and China LED Industry Report, 2011-2012" worked out by ResearchInChina offers a full and detailed picture of the industry worldwide and focuses specifically on the Chinese market. It covers:

More new market research reports by the publisher can be found at ResearchInChina page.