Almost 2,300 Clinical Trials to be Conducted in Central Europe in 2014, Reports PMR

The Central European (CE) region has, in recent years, been extensively affected by changes in global trends pertaining to clinical trials, mainly because of the regulatory and economic developments in the countries involved. Rising costs have forced global concerns to increase their total spending on research and development. As a consequence, global outsourcing trends have become more prevalent in recent decades, particularly on markets such as CE which are strategically important. In total, the number of new clinical trials is expected to rise by 6-7% per annum between 2012 and 2014. Most will be phase III oncology studies.

The number of clinical trials in all of the countries analysed has been affected by the global economic crisis. In regional terms, in 2009, the reduction in the number of trials reached almost 5% in comparison with 2008. In 2010, the overall market recovered, with 4% more trials approved than in 2009. Our estimates showed that 2011 ended with a slightly lower increase than that of 2010, because of a reduction in the number of trials in Hungary in the wake of legal changes (retrospective tax on R&D expenses).

“We expect a 6% increase in the number of clinical trials in the CE region in 2012. Optimistic forecasts for countries such as the Czech Republic, Bulgaria and Romania suggest a year-on-year increase of one percentage point in the growth dynamics in 2013. In general, however, there will be a slightly less substantial increase in the market in terms of the number of clinical trials in comparison with the years before the financial crisis (2009). This will be associated with the further economic and political integration of all of the relevant countries with the EU. The cost of clinical trials will gradually rise, making the countries less attractive to pharmaceutical concerns.” said Monika Stefanczyk, the Head Pharmaceutical Market Analyst at PMR.

According to the report “Clinical Trials in Central Europe 2012. Development Forecasts for 2012-2014.” by PMR, Poland has the most substantial number of open clinical trials (almost 1,200) and accounts for 33% of all open trials in the countries analysed. Both the Czech Republic and Hungary conduct 300-400 trials every year and account for similar proportions of open trials. Almost 13% of all open trials are accounted for by Romania.

In all of the six countries analysed, the breakdown of clinical trials in terms of phases showed similar proportions. Most open studies in the CE countries selected were phase III studies, and three-fifths of the 2,460 total were open trials in March 2012. The proportion represented by the phase III group varies between 53% in Poland and 67% in Slovakia. The figure for Phase II studies varies between 21 and 24%, with the exception of Slovakia, where it was 14%. The most substantial percentage of phase II studies was observed in Hungary. When counted together in all countries, approximately 10% of clinical trials were phases I and IV, with phase I accounting for only 2-5% of the total number of studies and phase IV 7-9%. 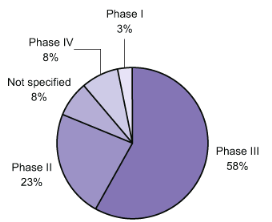 The most prominent therapeutic category in the CE countries in question is that of antineoplastic and immunomodulating agents, which account for 34% of all open clinical trials – the largest figure was that of Poland (37%), and the lowest that witnessed in Bulgaria (29%). Non-small cell lung cancer and breast cancer were among the oncological diseases most commonly investigated in each country. The second and third categories were the alimentary tract, along with digestive metabolism, and the nervous system, with 14% and 13% respectively. The highest percentage of nervous system diseases was observed in Bulgaria (17%). The categories most often included in clinical trials in all countries were treatments for depressive disorders, epilepsy and multiple sclerosis. Digestive disease was the most common category in Romania (16%). In each country there were studies pertaining to diabetes, hepatitis C and B and Crohn’s disease.

Number of open clinical trials in CE, by therapeutic category, as of March 2012 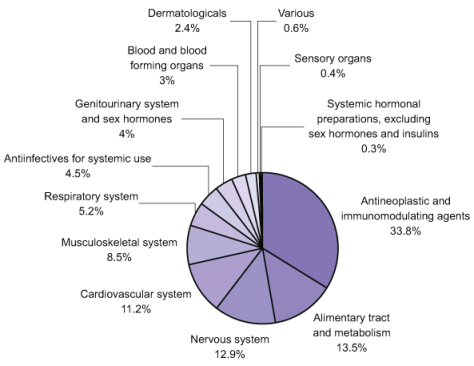 More information can be found in the report “Clinical Trials in Central Europe 2012. Development Forecasts for 2012-2014.” by PMR.