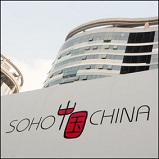 LONDON – In April 2012 SOHO China announced its acquisition of Tianshan Road Project, its 11th property in Shanghai, for CNY 2.1 B. The land was purchased as 100% interest of Shanghai Greentown Plaza Development Co. Ltd. The project embodies a mix of office and commercial area totaling 172,208 m2, where 52,911 m2 is office space, 37,517 m2 is hotel space, 16,991 m2 is commercial/retail space. Having a strategic location in the center of Shanghai, Tianshan Road Project is to be an attraction for numerous companies including large multinational corporations.

The acquisition comprises a part of SOHO’s strategy focusing on high-end properties in the crowded central areas of Beijing and Shanghai. After stepping into Shanghai market in August 2009, SOHO China has made significant success and expanded into the city’s most popular districts: the Bund, Nanjing West Road, XuJiaHui, Hongqiao Transportation Hub, and Pudong.

Last year was the hardest of all for SOHO China, yet the company was able to improve its profitability despite falling sales. In FY 2011 revenue declined by 68.8% to CNY 5.7 B, gross profit decreased by 70.5% to CNY 2.73 B, operating income lost 26% and amounted CNY 6.45 B, net income, however, increased by 7% and reached CNY 3.9 B. H2 2011 showed a surprising recovery of incomes: revenue amounted CNY 3 B, gross profit equaled CNY 1.2 B, operating income was CNY 3.1 B and net income grew to CNY 2.14 B. The improvement is partially explained by rent price gains.

Founded in 1995 and headquartered in Beijing (China), is the biggest real estate developer in Beijing and one of the largest in Shanghai. Its innovative designs and aggressive expansion policy has claimed the company as a serious buyer with strong net cash position. Apart from 16 projects in Beijing and 11 in Shanghai, SOHO is also developing Boao Canal Village resort in Hainan. Since 2007 the enterprise trades on Hong Kong Stock Exchange under the ticker 0410.