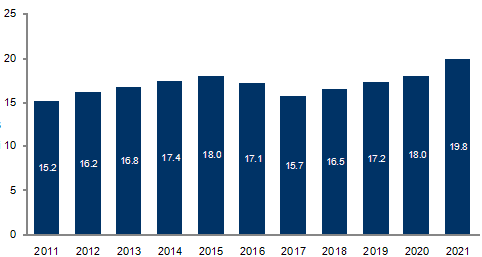 Current innovations are oriented towards increasing speed with hypersonic missiles, shooting down missiles in mid-air with interceptors, enhancing anti-aircraft carrier capabilities, increasing payload capacity, facilitating navigation, and introducing stealth capabilities. The global defense industry is investing significantly in the development of technologies to enhance the speed, accuracy and destructive power of missiles. The global economic slowdown has reduced military expenditure worldwide, as a consequence of which a significant number of countries are establishing joint projects in order to share R&D costs.

Despite budget cuts, North America is expected to account for the largest share of the total global expenditure on missiles and missile defense systems with a 35.6% share in the forecast period. High demand in the region is primarily driven by the country’s five major missile defense programs.

A number of countries worldwide are planning to increase their nuclear capabilities and missile strike ranges. Countries such as the US, India, Russia, Israel, China, Italy, Germany, France, Spain, Sweden and the UK are procuring long-range ICBMs which are capable of hitting targets at distances of up to 6,000 kilometers.

The US and its allies believe that North Korea will develop an ICBM in the next five years. Taking into account the volatile relationship between the US and North Korea, this development could pose a significant threat to the security of the US, South Korea and many countries in Europe. The sinking of South Korea’s Cheonan warship by North Korea in 2010, and the testing of its nuclear weapon in 2009, have further strained relations between the two countries.

Foreign OEMs seeking to enter a specific missiles market often enter into marketing agreements with domestic companies to gain an opportunity to market their products in a specific region. For example, in August 2011, Raytheon of the US and Israel's Rafael Advanced Defense Systems Ltd teamed up to market the Iron Dome weapon system in the US.

More information can be found in the report “The Global Missiles and Missile Defense Systems Market” by iCD Research.