On the back of an excellent start into 2011, the full year’s construction output will increase by around 11%, mostly driven by dynamic implementation of large civil engineering projects. However, the construction sector is likely to grow slower in the years 2012 and 2013. According to contractors, the appeal of residential and railway construction segments was boosted over the past year, while the attractiveness of road construction, environmental construction and sports facilities construction declined.

The twenty-first edition of the report “Construction Sector in Poland H1, 2011. Market Analysis and Development Forecasts for 2011-2013” published by the research company PMR painted an improved outlook for the construction market for 2011. However, projections regarding the situation in the sector in 2012 and 2013 had to be adjusted.

After an excellent start into the new year for the construction industry (up by nearly one-fifth in Q1 2011), which was partly due to a low base of comparison, the authors of the report expect that the pace at which the construction segment will grow in the remaining part of the year will steadily fall. Consequently, the full year’s growth will be around 11%, which is set to be the highest result shown by the construction sector since 2008. Construction output growth will slightly slow in 2012 and 2013, principally in the wake of a reduced number of new civil engineering projects.

According to the report’s authors, civil engineering construction will continue as the driving engine for the construction sector in Poland in 2011 and 2012. The reason behind the leading role to be played by the civil engineering segment is expected to be the dynamic implementation of large civil engineering projects related to Euro 2012 hosted by Poland. Solid growth will also be fuelled by capital expenditure on water supply and sewage discharge infrastructure projects, in both small and large urban agglomerations, and by railway construction projects, especially those concerning the Warsaw-Gdynia and Katowice-Rzeszow lines. Furthermore, the power sector is expected to accelerate – the number of planned investment projects in this branch has steadily grown, but they will be implemented over extended periods of time and will start to yield substantial revenue only after 2013 when proceeds from road construction projects are set to decline.

However, the outlook for non-residential construction has improved considerably in the last few months. Due to a low base of comparison and, additionally, driven by the renewal of numerous commercial construction projects, after a 4% decline recorded in 2009, non-residential construction accelerated significantly in H2 2010 and ended the year on a positive note. In 2010 public utility buildings were another major market force, in addition to commercial buildings; however, this sub-segment can lose some of its significance in the coming years due to restrictions on local governments assuming further debt. Yet, on the back of improvement in the financial sector and more dynamic growth in the Polish economy, the share of large commercial construction projects, in particular retail and office schemes, will increase in the forthcoming years.

Concerning residential construction, property developers had suspended many large projects, which pushed residential construction and assembly output down by around 10% annually in 2009 and 2010; this, however, should be deemed a relatively good result compared to other countries in the region which were subject to much more intense pressures. Therefore, due to the growing activity of the major developers, PMR researchers expect that residential construction output will start to grow in 2011 and in the subsequent years. But it should be noted that the output’s value should grow at up to 20%.

The most attractive segments of the Polish construction market in the next two years. 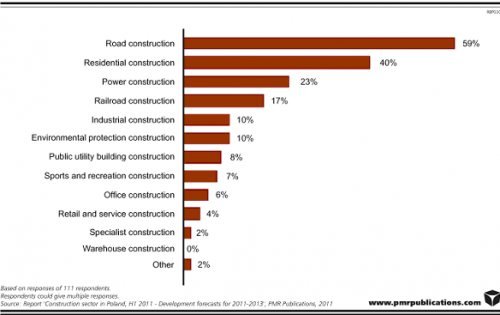 Power construction (including facilities for the power, gas and fuel industries) was ranked third in terms of sector attractiveness, garnering 23% of responses. In March 2010 and September 2010, it was selected by 27% and 30% respondents, respectively. Accordingly, combined with delays in the preparations of power projects, contractors’ confidence about prompt implementation of these projects has been falling. However, taking into account a longer time scale (subsequently to 2013), power and industrial construction contracts will largely compensate companies for reduced projects in the road construction segment.

More information can be found in the report “Construction Sector in Poland H1, 2011. Market Analysis and Development Forecasts for 2011-2013” by PMR.